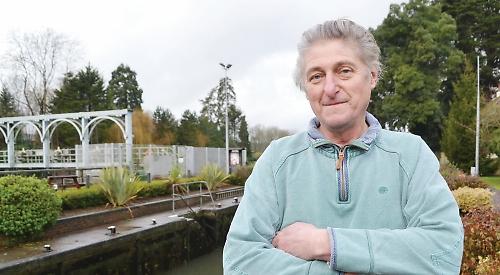 A HENLEY lock-keeper is moving on after almost two decades.

Nigel O’Connor, 66, took on the role at Marsh Lock in 1998 and was following his father George who was keeper at Hambleden Lock for most of his life.

Over the years he has raised £9,221 for the Henley branch of the Royal National Lifeboat Institution by collecting money from river users.

The charity awarded him a certificate for his efforts.

Mr O’Connor was born at the former Roebuck Ferry keeper’s cottage in Tilehurst and grew up in Hambleden with his father, who died in 1990, and mother Hazel, who now lives in Lever Road, Henley.

He worked as a telephone engineer and long-distance lorry driver before taking a temporary job as a keeper’s assistant at various locks on the Thames in the early Nineties.

He then became keeper at Marsh Lock and has lived in the cottage on the lock island ever since.

Mr O’Connor, a father-of-three, said: “It was just fate that I ended up working on a lock like my father.

“I was out of work, saw the job advertised and thought, ‘I could do that’.

“The lo ck’s a lively place with lots going on, even though it is outside Henley town centre. I get to meet lots of people and have made a few friends along the way.

“You’ve got to be a people person because people mostly use the river for leisure and don’t want to be confronted by a grump. You’re also a vital source of information about things like flooding. I love the diversity of the job. You enjoy the busy time in the summer, particularly around the regatta and the Henley Festival, but there’s plenty of quiet time in winter to get tasks done.”

Mr O’Connor agreed to take collections for the RNLI about a decade ago and most of the money comes during the five festival evenings in July.

The lock used to be unmanned at this time but Mr O’Connor had the idea of staffing it and charging an optional charity “toll”.

He said: “It’s amazing how generous people have been. They’re happy that someone’s there to let them through and the charity benefits so everyone wins.”

Norman Daniells, chairman of the Henley RNLI, said: “Mr O’Connor’s total is an impressive achievement and we are very grateful. We hope his successor will be as supportive.”