Space odyssey is a rude awakening 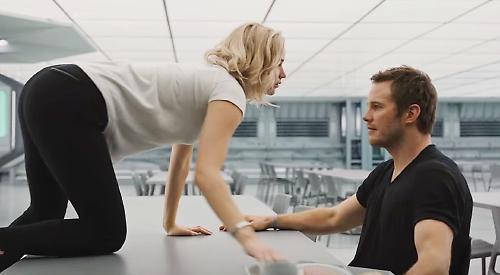 THE genre of “space exploration gone wrong” has carved out quite a niche for itself over the years and has proved incredibly popular with audiences.

No longer content with storylines which explore the deepest, darkest depths of the universe, audiences now demand to be sucked even further into the cinematic black hole and discover what happens when catastrophe strikes in the most unforgiving environment imaginable.

Here we come to the sub-genre of the peril encountered by these hapless crew members who awake from hibernation on board these doomed vessels.

Think Alien and Planet of the Apes and now, this week, we have Morten Tyldum’s Passengers. When two people on a deep-space mission are unexpectedly awoken from their slumber, they are forced to depend on one another for survival.

Aurora (Jennifer Lawrence) and Jim (Chris Pratt) are on a 120-year journey destined for life on another planet, but their stasis is suddenly interrupted 90 years before they were due to wake up. Unable to return to their slumber, they’re stuck together on a ship hurtling through the unknown.

They are forced to unravel the mystery behind the malfunction as the ship teeters on the brink of collapse, with the lives of thousands of passengers in jeopardy.

As they begin to investigate the mystery, the two begin to fall for one another — but will they be able to survive the deadly truth about why they woke up in the first place?

While an interesting blend of action-thriller with a dash of romance thrown in for good measure, who knows what this will add, if anything, to the genre.

Tyldum, best known for the excellent Imitation Game, will need to be at the top of his game here. Sci-fi films are ten a penny, but many have fallen foul of the pursuit of making a quick buck.

A quick glance at Tyldum’s CV will tell you he is a complete novice at handling the genre.

But fear not, he has two highly watchable stars at his disposal and they will undoubtedly be the big draw here.

Chris Pratt and Jennifer Lawrence pair up and let’s hope their chemistry on screen will be as impressive as the ubiquitous, yet eye-popping, special effects.