MY FIGHT WITH BREAST CANCER 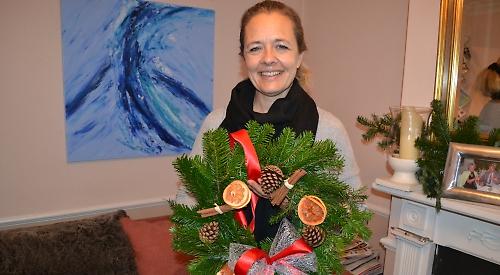 A HENLEY town councillor has talked publicly for the first time about her fight against breast cancer.

Sam Evans says she has been overwhelmed by the kindness shown to her by friends and colleagues since her diagnosis.

And she has appealed to everyone to “get your bits checked”.

She has had surgery twice and faces three weeks of radiotherapy in the New Year before hopefully being given the all-clear.

Ms Evans, 49, is a member of the ruling Conservative group on the town council but has been relieved of her town hall duties since September. She said: “I’ve been incredibly lucky with the kind of cancer I’ve got and the fact I’ve caught it early. We live in the most wonderful town but, my God, I have been overwhelmed by how kind people have been.”

Ms Evans, who lives in Reading Road, discovered a lump in her right breast in August and went to see her GP Dr Clare Alsop at the Hart Surgery.

She said: “It was frightening. What I did was tell a really good friend that I had a suspicious lump, knowing they would nag me every day to go to the doctor. I went along with her and we treated it as morning out and a catch-up.

“Dr Alsop was fab. She said, ‘you know it’s probably nothing to worry about but you need to get it seen to’.”

Two weeks later Ms Evans went to the Royal Berkshire Hospital in Reading to have a mammogram which showed the lump was about the size of a golf ball.

She said: “Even on that first day they said, ‘we will be treating some form of cancer, we just don’t know what’. I realised there was something the matter when I was having an ultrasound scan. I was in there such a long time and she was going over and over the same area.

“I said, ‘there’s a reason I’ve been here such a long time’ and she said something along the lines of, ‘there’s something there we have reason to worry about’.

“I went into absolute shock. It was disbelief. It’s a bad year if I have to go to the doctor once — I’m never, ever ill. You get the news and you think, ‘wrong person, it isn’t me’ and wake up in the night wondering what’s going to happen. The word ‘cancer’ just goes round and round in your head. It’s just fear of the unknown.

“I’ve had lots of friends survive cancer. I’ve also had four close friends die from it. When you find out you have got it, you only think about the bad news at first.

“One of the worst parts was telling my parents. They’re in Gloucestershire but they would have moved in if I’d let them!”

A biopsy found that Ms Evans had lobular cancer, a type that begins in the milk-producing glands of the breast.

She underwent a lumpectomy, a surgical procedure to remove the growth and a small amount of the surrounding tissue.

The doctors told her that from her diagnosis to surgery the lump had grown by 20 per cent. She was discharged from the Royal Berks but had to return after developing a haematoma, a solid swelling of clotted blood within the tissues, and was kept in for three days.

She then returned home to her dog Humphrey, a six-year-old golden retriever who was looked after by her parents and dog walker Christie Sneddon while she was in hospital.

Ms Evans, who runs luxury concierge business Humphreys of Henley, said: “I had to rest and recuperate and because I work from home that made it a lot easier. I could do a few hours then have a sleep.

“My way of dealing with it was I realised I needed normality. I didn’t want people’s pity every time I saw them so I did the only thing I know how to do, which is get on with work.

“I was getting up at 6am, walking the dog and doing normal things. I’m not a great one for fuss and all that malarkey.” In November she underwent more surgery to reconstruct part of her breast and had to spend an extra three days in hospital after suffering another haematoma.

She has continued going back to the hospital for check-ups before she returns for the radiotherapy treatment.

Ms Evans said: “As soon as I was put on that treatment pathway I knew what was happening and what was going to happen because that was the known. Being part of the process takes away the scariness of it.

“I’ve been quite open about it, particularly because I wanted to say to everyone, ‘get your bits checked’. I don’t want it to be a taboo subject. If one person goes to the doctor and it has helped, hopefully more will.

“If there’s the slightest hint of something, then go and get it tested.

“There’s no getting away from the fact that the earlier you catch it, the better it’s going to be.

“Not only have I shortened my treatment, it’s going to be less damaging to me. I do feel genuinely lucky.”

Ms Evans thanked people for their kindness towards her, saying: “I’ve had the most generous, heartfelt love and support coming from every direction — from offers to walk Humphrey to having the house look like a florist’s.

“The thing that reduces me to tears is all the people being nice to me and the feeling that it’s heartfelt — it’s lovely.

“I’ve also got to say a huge thank-you to the Royal Berks, from the nurses to the doctors to the gorgeous woman who brought me a cup of tea in the morning.

“The other real positive is that it has given me every reason to be happy again.

“All the stuff we worry about, it doesn’t go away, but I just feel like this has put everything into perspective.

“The red wine and champagne will flow big time when I get the all-clear!”