60-plus club in Henley held a Christmas party 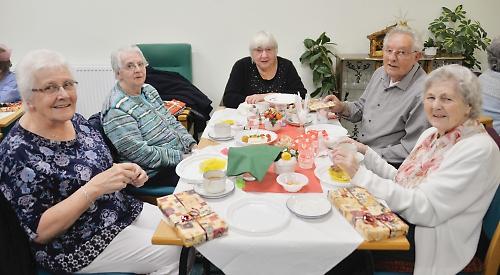 Party people: members of the 60-plus club in Henley held a Christmas party. About 50 people enjoyed tea and entertainment at the social club in Greys Road car park. Roger Selman, from Streatley, played the piano and town councillor David Eggleton dressed up as Santa as he helped hand out food and drink. The event was organised by his mother Ann with Iris Goodchild, Michelle Gosby and Sheila Edwards. Mrs Eggleton, of Gainsborough Crescent, Henley, said: “The event was funded through bric-a-brac sales and garden parties we have held through the year. We had a good raffle which Tesco donated things towards, which was very nice of them. Roger Selman was very good — he played soft music while people ate and then played for a singalong later.” Pictured, clockwise from above left, June Hunt, Val Ryan, Betty Hemmings, John Hemmings and Pam Jebb; Dave Harms and Chris Eggleton; pianist Roger Selman; organisers and helpers Iris Goodchild, Ann Eggleton, Michelle Gosby and Sheila Edwards