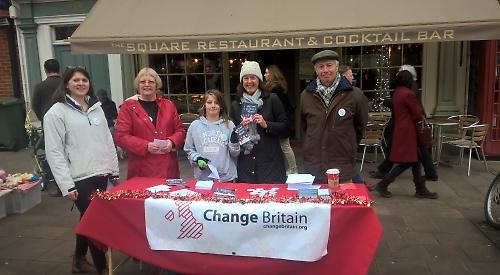 CAMPAIGNERS who supported Britain leaving the European Union asked people to send Christmas cards to Henley MP John Howell calling on him to respect the result of the referendum.

More than 60 people signed cards at the Change Britain street stall in Market Place urging him to vote unconditionally in favour of the Government triggering Article 50, which will formally start the leaving process.

The event, held on December 17, was part of a Change Britain campaign day which took place in more than 50 towns and cities across the country.

Volunteer Martin Dew, who lives in Northfield End and co-ordinated the Vote Leave campaign in Henley prior to the referendum in June, said: “All we want for Christmas is the democratic voice of the British people in the EU referendum to be respected and for MPs to vote to trigger Article 50 without delay.”

Mr Howell has said the Government has a responsibility to uphold voters’ decision to leave the EU.