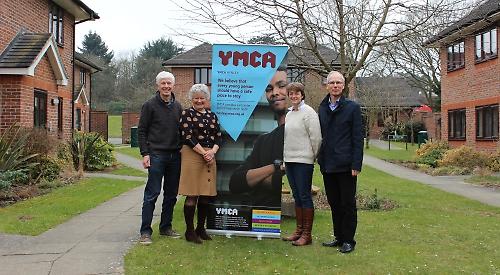 AN appeal to buy housing for young people in Henley has reached its £300,000 target.

It means the YMCA should be able to buy the lease on the flats at its Lawson Road complex, which house 31 people aged 18 to 25 with links to the town and nowhere else to go.

The charity needs £570,000 in total but has already secured a £100,000 grant from Henley Town Council and its request for a £170,000 loan from South Oxfordshire District Council will be considered in February.

Mayor Julian Brookes, who led the fund-raising drive, said: “I’m extremely happy that we have been able to raise the money and people have been so generous.

“We’re looking forward to having a Henley institution — the only YMCA in Oxfordshire — continuing to support the young people of this town.

“It’s about giving these people a break in life and I believe it’s very important to have this kind of facility.

“There are people in the town who are just about managing with jobs that pay barely more than the minimum wage and these are hard-working people. They want their self-respect and to stand on their own two feet.”

The appeal was launched after YMCA England announced that it was exiting housing and selling the property it owned.

The Henley branch owns the land in Lawson Road but not the 21 studio flats and 10 one-bedroom flats, which were valued at £566,500.

The Mayor, who made the YMCA one of his chosen charities for his year of office, said the majority of the money came from trust funds but a “significant” amount was donated by people and community groups in the Henley area.

The Thamesfield Youth Association donated £50,000 from the sale of the former Henley Youth Centre site in Deanfield Avenue.

He said: “I wholeheartedly thank them because this has given us the ability to secure the future for Henley YMCA.

“The risk was that it would come under the umbrella of some other organisation, probably another YMCA, and clearly that would have its own strategy and residents and so on.

“There was a concern that we would lose this facility for Henley and the surrounding area. We give priority to those who are Henley residents or have a strong connection to the area.”

Councillor Brookes said he was cautiously optimistic that the district council would agree the loan, adding: “I’ve received expressions of support from key cabinet members.”

There has not been an empty property at Lawson Road for more than eight years.

Cllr Brookes said: “The YMCA is one of Henley’s best-kept secrets. It’s so well managed that they have never come to the council for a handout.”

The charity is also waiting for the Homes and Communities Agency, a government body that regulates social housing providers in England, to approve the Henley YMCA as a registered housing provider in its own right, a legal requirement.

It had to provide a 30-year maintenance plan for the buildings, a five-year business plan and “stress testing” to demonstrate how it would cope if there were empty rooms or if rental income decreased.

He said the YMCA would be trying to raise between £100,000 and £150,000 for refurbishing the flats once the lease had been secured. The kitchens and bathrooms were put in when the accommodation was built in 2000 and are showing their age.

Rosemary Duckett, who chairs the YMCA’s trustees, said: “I’m absolutely amazed at how generous the people of Henley have been. I find it very heartwarming in this age of austerity that people are still willing to help.

“If we did not raise this money it is likely that it would have gone on to the open market and been sold to some other organisation. It could have been yet another care home or sold to another housing association.

“It wouldn’t be for local people and, specifically, I don’t think it would be for young people. I feel absolutely passionate that young people need to be helped.

“This is an expensive area but we do need these young people to work in and around Henley. We can offer the supported housing and help these people choose the right path in life.”

The Henley YMCA branch was founded in 1857 and has been based at its current home for 16 years. In December 2013 YMCA England decided that all its supported housing schemes should be locally owned as well as managed, so it could concentrate on the work of the charity at a national level.

As well as housing, the charity provides its residents with education support, such as money management courses, help with CVs and job hunting.