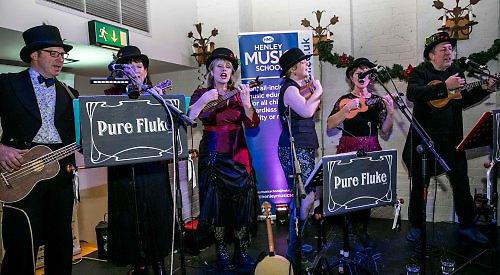 A RECORD amount was raised for charity by this year’s Henley Living Advent Calendar.

A total of £5,200 was donated over the course of the three-and-a-half weeks of festive entertainment, beating last year’s record by £200.

Organiser Richard Rodway said: “I’ve always said that it is not the be all and end all, but it’s always nice that we can raise some decent money for charities.

“The fact that we raised more than ever before can only be a good thing and hopefully is some measure of how well received the event has been this year.”

Musicians, actors, dancers, singers and theatre groups performed at different locations each night in December until Christmas Eve but their identities were kept secret until their 30-minute show.

Each evening was dedicated to a different charity which held bucket collections. Mr Rodway praised the quality of this year’s acts and said the mild weather helped attract the crowds.

“I think people have a view now that they are in for a good show,” he said. “People were coming up to me to say how many nights they had been to and how thankful they were for the event. It created a buzz all month, which gives you added enthusiasm to want to keep doing it.”

Mr Rodway added that he was already in discussions about next year’s Living Advent Calendar.

On the final evening, the St Mary’s Church choir sang carols outside the church in Hart Street, led by the rector Rev Canon Martyn Griffiths. Their repetoire uncluded Silent Night and While Shepherds Watched Their Flocks By Night.

Hymn sheets were handed out to the 150 people in the audience and they were invited to join in with the likes of O Little Town Of Bethlehem. The spectators were also served mince pies. The performance was in aid of the Mayor’s three charities, Henley YMCA, Riverside Counselling and youth and community project Nomad.

On the previous night, ukulele group Pure Fluke performed at Hotel du Vin in New Street, where the show was moved to from Falaise Square due to bad weather.

About 100 people watched the set, which included Steve Harley’s Make Me Smile (Come Up And See Me), Amy Winehouse’s Back to Black and a rousing version of Fairytale of New York, with which the audience joined in.

Other performers during last week included siblings Annabel Marlow, 17, who played ukulele and sang two of her own songs while her brother Toby, 22, added vocals. They were the first of two acts to appear at Christ Church. The second act was a Roald Dahl-themed performance by members of the Stagecoach Theatre School, who read extracts from the author’s books.

The show was in aid of the Henley Youth Festival and partnered by estate agent Philip Booth.

A group of musicians played festive songs out of a first floor window at Delegate House in Hart Street on the 22nd night. The group was led by Lucie Henwood and comprised Sadie Hellon, Terry Wilson, Dave Pinder, Gail Rosier, Raffi Spring and Andy Crowdy, who sang and played instruments including guitars, ukuleles and a saxophone.

The night was in aid of the Regatta for the Disabled and refreshments were provided on the night by Cannelle Beauty in Hart Street.

The Living Advent Calendar is sponsored by Higgs Group, publisher of the Henley Standard. Other sponsors include the Head Partnership solicitors, CTC-aspire and Philip Booth. The Henley Business Partnership and Henley Town Council also support it.ophone.

At one point Mrs Spring and Mr Crowdy descended in to the crowd to play a Christmas medley, before the group finished with “Walking in a Winter Wonderland” as fake snow was blown on to the audience.

The night was raising money for the Regatta for the Disabled and snacks and refreshments were provided on the night by Cannelle Beauty in Hart Street.

A ukulele group performed at the Hotel du Vin in New Street on the penultimate night of the event.

The performance had been scheduled to take place in Falaise Square but high winds and rain meant a change of plan, and the hotel was able to offer the performers and audience shelter in the Ruinart room.

Pure Fluke performed on a temporary stage to an audience of around 100 people.

Their set included Steve Harley’s Make Me Smile (Come Up And See Me), Amy Winehouse’s Back to Black and finished with a rousing rendition of the The Pogues, and Kirsty MacColl’s Fairytale of New York, which the audience all joined in with.

Dave Pinder and Terry Wilson were performing for a second night in a row having been part of Lucie Henwood’s ensemble.

The final night of this year’s Living Advent Calendar saw a carol performance by the choir of St Mary’s outside the church in Hart Street led by Father Martyn Griffiths.

The audience of about 150 people were treated mince pies, and donated to the Mayor’s three chosen charities - Henley YMCA, Riverside Counselling and the Nomad youth and community project.

Hymn sheets were handed out to the audience who were invited to join in with the likes O Little Town Of Bethlehem” while the choir performed Silent Night and While Shepherds Watched Their Flocks By Night.

The Living Advent Calendar is sponsored by Higgs Group, publisher of the Henley Standard.

Other sponsors include the Head Partnership solicitors, CTC-aspire and Philip Booth. The Henley Business Partnership and Henley Town Council also support it.