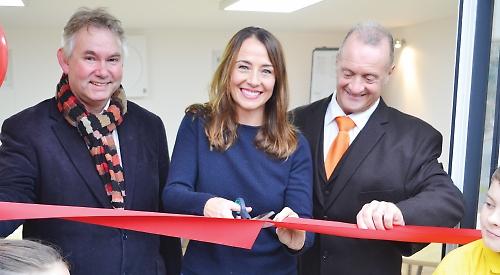 A NEW music room has been unveiled at a Henley primary school.

Parents, children and staff at Valley Road Primary School raised £30,000 for the cedar wood building, which will be used for music lessons and will be available for community use during non-school hours.

Until now, lessons have taken place in hallways or the staff room.

Known as “the Happy Valley Room”, it has been built on a disused piece of land at the front of the school and contains a new piano.

The school raised almost half the total with events including a rock concert, acoustic music nights, a camping weekend and a jazz music event at the Kenton Theatre organised by Henley Rotary Club.

The remainder came from donations from individuals, organisations and businesses.

The official opening was carried out by headteacher Tim Coulson, parent Kerry Emanuel, who led the fund-
raising project, and Davy Snowdon, managing director of Pristine Condition, a manual handling training company based in Northfield End, Henley, who donated £5,000.

Mr Coulson said: “The arts are important parts of the curriculum and we wanted somewhere the children could enjoy playing in a nice, cosy atmosphere. It’s far better than I ever thought it would be.”

Mrs Emanuel, of Greys Road, Henley, whose children Luca, 11, and Ottilie, eight, both play the piano, called the new room “fabulous”. She said: “My daughter is at the school while my son has just left and gone to Gillotts and I felt it was so important to build it.

“There’s so much emphasis on reading, writing and maths, which of course are important, but I think sometimes the other elements of learning can be missed.

“Tim and the staff are fantastic in getting the children involved in art, drama, singing and music and that helps ensure every child leaves here with a huge sense of achievement.”

Mr Snowdon said: “We sponsor the Henley Symphony Orchestra, which rehearses at the school, and it was the link with the budding musicians that I liked. All we need to do is put in a nice garden around it so we’ll look to get involved with that.

“There is a lot of cuts and schools are on shoestring budgets so it’s great to do a little something for the community and budding musicians.”

Pupil Eddie Pratt, 11, who plays guitar and sings, said: “I think the music room is really going to help because the people who have been practising their instruments in school haven’t had really anywhere to go.

“It’s sound-proof so the rest of the school can carry on with what they are doing at the same time.”

Katy Shaw, 10, who plays the piano, said: “It looks very welcoming. When I first went in there I thought, ‘wow’.”

Bethann Bowsher-Larner, who also plays the piano, said: “You have more space and you feel comfortable when you’re playing.”

The building was erected during the summer holidays by Buckinghamshire firm Green Retreats.

The other donors were the Shanly Foundation, Henley Round Table, the Stuart Turner Foundation, Pat Jordan Evans, the John Hodges Trust and Sainsbury’s Local.