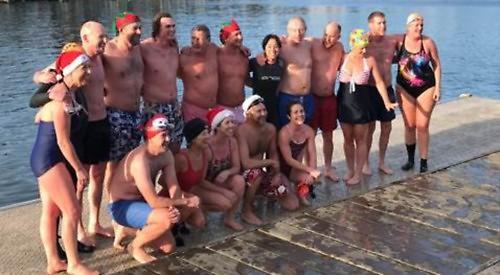 EIGHTEEN swimmers braved the chilly water of the River Thames in Henley for the seventh annual Boxing Day dip.

They swam 70 metres from the landing stages near Red Lion Lawn on the Oxfordshire bank to Leander Club on the Berkshire side, cheered on by family and friends.

Most were in traditional bathing costumes but two people wore wet suits to combat the 6C water temperature and some also donned Christmas hats.

Before the challenge the swimmers met at the Angel on the Bridge pub for their traditional drink.

The event is organised by the Heller family, from Skirmett, who also take part.

The number of participants was down on last year’s record total of 52 because many members of the family were unable to be there and about two thirds of this year’s swimmers were first-timers.

Beatrice Heller, 30, who swam with her sister Rosie, 26, mother Mandy, 62, uncle William, 67, and cousin Henry Collett, said: “The water temperature was a little lower than in recent years but we benefited from gloriously sunny weather and a flat, calm river, making swimming conditions ideal.

“We had far fewer family members who were able to do it this year so I wasn’t sure how many people were going to turn up and was pleasantly surprised when quite a few locals showed up and joined in.

“As usual, swimmers entered the water from the Oxfordshire bank with minimum fuss and sculled our way across to the Berkshire bank.

“The conditions were absolutely perfect and, excuse the pun, it went swimmingly. Everybody was in fine spirits. There was not a great deal of fuss and I think the adrenaline was flowing and people just got on with it. There were many more spectators than swimmers and they greeted us with dry clothes, towels and celebratory hot toddies.

“Both swimmers and spectators seemed to thoroughly enjoy themselves. as always.”

Ms Heller said her sister was probably the youngest participant while her uncle was the oldest and decided to wear a wetsuit. She said: “My auntie thought, ‘take your wetsuit this year — it might be sensible to put it on’.”

Ms Heller said sea swims were popular at Christmas and New Year but they were not practical for her family as they lived so far from the coast.

“I think people like the idea that we have found our own bit of water and can continue the tradition,” she said,

Among the swim debutants was Laura Reineke, the founder of Henley Music School, who was persuaded to take part by a friend, Oliver Browett.

She said: “I’m pleased I did it. If I say ‘yes’ to something I have to do it. Oh my God, it was cold. It was the kind of cold that you don’t get used to — you just get number and number.

“I jumped in and I did granny swimming so my head was always above the water. When I was halfway across I was thinking, ‘I’ve really gone off Oli!’

“When I got out I had pins and needles all over. I couldn’t feel a thing.”

Mrs Reineke, who lives in Berkshire Road, was watched by her husband Antony, who runs jewellers Studio 35 in Duke Street, and children, Mae, Ava and Alfie.

He said: “I saw it in the paper last year and thought it would be fun if we could get a group together.

“It was a laugh and a good, fun thing to do. It just shows the sort of character of Henley — get up and go and not taking ourselves too seriously.”