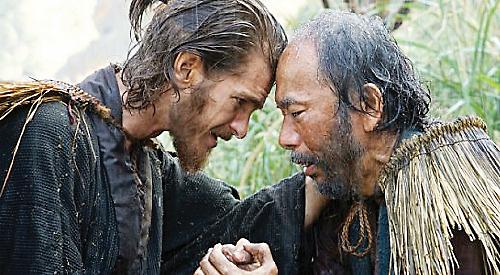 THE release of a new Martin Scorsese film is an event in itself and, make no mistake, the high regard for the Hollywood grandee is richly deserved.

Last month when I extolled the virtues of Clint Eastwood, as we took a sneak peak at Sully, I said there could be few more capable directors.

But in Scorsese we most certainly have one better — if not the best.

Needless to say, his latest effort with Silence will have fans and film critics barely able to contain themselves.

The celebrated director’s 28-year journey to bring Shusaku Endo’s acclaimed 1966 novel to life finally makes it to cinemas this week. Silence tells the story of two Christian missionaries (Andrew Garfield and Adam Driver) who face the ultimate test of faith when they travel to Japan in search of their missing mentor (Liam Neeson) — at a time when Christianity was outlawed and their presence forbidden.

No stranger to period dramas, with previous Oscar nominations for The Age of Innocence and Gangs of New York, Scorsese this time goes further back for his second religious epic after 1988’s The Last Temptation of Christ.

Set in the 17th century, the two young Portuguese Jesuits, Sebastião Rodrigues and Francisco Garrpe, are shocked by the treatment of their fellow Christians and travel the country witnessing the terrible persecution of their faith and facing very real personal danger.

While Scorsese often returns to several core themes within his work — identity, guilt, redemption, crime, hedonism, violence and conflict — his ability to weave these into awe-inspiring narratives and produce simply breathtaking pieces of cinema is second to none.

Despite a commonality in themes there is huge diversity in the way in which they are delivered.

Goodfellas, Shutter Island, The Aviator, Gangs of New York, Raging Bull and Taxi Driver are wildly different from one another.

Silence is, like much of the auteur’s work, created on a grand scale.

With a running time of more than two and half hours and a project more than a quarter of the century in the making, this is personal and surely another Oscar awaits.

The film is now showing at Henley’s Regal Cinema.