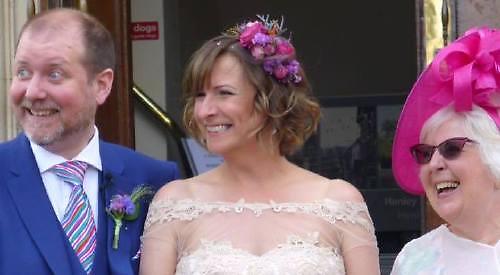 A HENLEY pub landlord has died suddenly just months after getting married.

Rob Myles-Hooton, who ran the Old Bell in Bell Street with his wife Pamela, collapsed while on his boat Lola Belle at the Hobbs of Henley boatyard, off Wargrave Road, on Monday afternoon.

The 41-year-old had suffered a brain haemorrhage. He had previously had surgery for a condition called AVM.

Police, firefighters and paramedics were called out at about 5pm and found Mr Myles-Hooton on the boat, which was raised on blocks out of the water. He was pronounced dead at the scene.

Mr Myles-Hooton and his wife married in July, seven years after she moved to the town and started going to the pub, where he worked behind the bar, to make friends.

They took over the Brakspear pub in 2014.

Mrs Myles-Hooton, who is originally from Dundee, said: “I’ve never met anyone as thoughtful as him. I loved him so much and he loved me.

“I’ve never felt so loved by anyone and I felt it every day in the way he looked at me and everything he did. Everyone saw it. He was a truly generous person and a massive loss. He was the best person for me, I’m heartbroken.”

The last time Mrs Myles-Hooton saw her husband was on Monday afternoon.

She said: “Rob said he was going down to the boat to take pictures so we could put it up for sale. When I got to the car I saw it needed petrol so I called Rob so I could get his card as I came past. That was the last time I saw him.”

She was travelling to meet a colleague for dinner in London later in the afternoon when she first became concerned that she hadn’t heard from her husband.

Mrs Myles-Hooton said: “I got on the train at about 5pm and felt unsettled so I started ringing him but there was no answer from any of his phones.

“I rang the person I was going to see and said, ‘something’s not right with my Rob, I’m not going to make it’. I got back at about 5.40pm. Some staff were at the pub and we found a number for Hobbs. When we rang I could tell something wasn’t right, it was like they didn’t want to tell me something.

“Rob had arrived at the boat at around 2pm. It was a horrible day and he had tied the dogs up, which he would never have done for a long time so he obviously meant to take some photos quickly.

“They didn’t notice until 5pm that the ladder was still by the boat and found him up there. The dogs were very distressed and soaking wet.

“I went up on the boat and he was just lying there on his back. I was able to hold him, kiss him and talk to him. It was so difficult but those moments were so precious.”

Police took Mrs Myles-Hooton to break the news to her mother-in-law Ann Hooton.

She said: “People said to let the police tell Ann but something inside me said that was wrong, I should be there. I had called Ann earlier to see if she had heard from Rob and when the police took me round she knew as soon as she opened the door.”

Mrs Myles-Hooton took the couple’s Chinese crested dogs, Lucy and Sassy, to visit the body at Wexham Park Hospital in Slough on Tuesday.

She said: “I’m glad we did it. They let the dogs in and they got to sniff him and see him one last time. He loved the dogs, they were a big part of his life. He would always give little presents from the dogs at Christmas.

“He was the kindest and most thoughtful person. If anyone was in need he would want to help, even if he couldn’t do much.”

She recalled one occasion when they noticed a small battery-operated toy in the window of a house while out walking the dogs. The toy, which was a small cat with a moving arm, had stopped working, so later Rob dropped two batteries and a note through the letterbox.

Mrs Myles-Hooton said: “He put the batteries in the envelope and said they were left over if the owner would like them. He did it in such a way that they wouldn’t think it was charity.

“He was very sensitive and aware of other people and their feelings. He would often go shopping before opening the pub and leave me presents on the stairs, like some new vegan chocolate he had found.

“It was something casual and not big but he would think of me and leave a little treat or a cup of coffee for me. That was the sort of person he was.

“He had so much integrity and a strong sense of what was right. He hated bigotry and racism — if he heard people in the pub being rotten he made it clear we wouldn’t tolerate that.”

Mrs Myles-Hooton recalled their wedding at Henley town hall which was followed by a reception at Leander Club which they walked to.

They held a boat party on the river during the day and made their own music video for the Lonely Island song I’m On A Boat.

Mrs Myles-Hooton said: “Rob loved being married and loved our wedding — it was the happiest day of our lives. We closed down Bell Street at one point and danced to a tune from Star Wars at the reception.

“I was so excited about our future. I just thought we would have more time together. He was a great person and I can’t say how much I’m going to miss him.

“I’ve been inundated with messages from well-wishers and people wanting to help. It shows how popular he was. We’ve had a lot of people contact us through Facebook, texts, calls or visits. Everyone is so shocked.”

Mr Myles-Hooton grew up in Chearsley, near Aylesbury, and had lived in Henley for more than 20 years. He formerly worked at wine merchant Unwins and the former Queen’s Head pub, now Pachangas.

The couple took over at the Old Bell when former landlord Bill Dobson retired in 2014.

However, recently they had been planning to leave the pub and open their own vegan café in Caversham.

Mrs Myles-Hooton said: “We had big plans. We decided a while back that we wouldn’t be renewing the lease. We were going to look at two properties in Caversham.

“We wanted to open our own little café and concentrate on our food. Our food had morphed into being completely vegan and we had a massive vegan following.

“Rob was a naturally good chef but he never really knew it until we started doing food.”

Mr Myles-Hooton had previously suffered a seizure caused by arteriovenous malformation, or AVM, a tangle of blood vessels in the brain, and had an operation last year.

His wife said: “He had a seizure in August 2014 and was diagnosed with AVM and epilepsy. He had stereotactic surgery in Sheffield on June 15 last year and had to have a frame on his head.

“It takes two to three years to work. He had had a few turns but was recovering. He had pictures of his brain scan and his head clamp which he put online. It made it less scary for other people with AVM. One of his aims in doing that was to alleviate the worry in others. He didn’t make a big thing about it but if you asked him he would talk about it.”

Mr Myles-Hooton’s operation was on his wife’s birthday but he still remembered the occasion.

She said: “He remembered to take my birthday presents to Sheffield but the best present was him starting to get better. The day after his operation I was going to pick him up but he turned up at the door so we could go to breakfast. He loved surprising me.

“In the time between his seizure and his operation I was really quite anxious and I would always be checking on him.

“After the operation I calmed down a bit because I knew something was happening to make him better. I really didn’t think it would get him.”

Mr Myles-Hooton’s mother Ann said: “Rob was always so kind and gentle, which is a rare commodity these days.

“He was an easy child to bring up. When he was five or six I saw him on the way back from the post office and he said, ‘I’ve just posted a letter to you, mummy’. It came in the post the next day and just said ‘I love you mummy’ in pencil.

“There was this well of love and he knew how to express it. He was a gift.”

Otto Stromfelt said: “My condolences. Devastated and our thoughts with you, Pamela. RIP, Rob.”

Dani Lloyd added: “Such a cracking bloke, Pam. I am so sorry to hear this. Truly he has left far too soon.”

Lou Iannetta said: “Utterly heartbroken for my dear friend Pam and so, so sad that this funny, witty, kind man has gone.”