Children can enjoy the journey at 'inclusive' youth festival 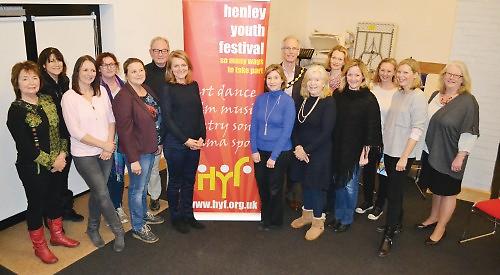 JOURNEYS is the theme of the 24th annual Henley Youth Festival.

Thousands of children will showcase their talents at this year’s festival, which runs from March 11 to 19.

There will be music, drama, dance and song, educational and sporting activities and writing, art and film competitions.

Mrs Swinburne-Johnson said: “We thought journeys could be taken literally, like taking a trip somewhere, but for older children you could perhaps think of it as a personal journey.

“Our festival is for the children to perform and, principally, it’s about what they can do. It’s getting them to show their talents but also to broaden their horizons and try things they haven’t tried before.

Mrs Dickson said: “We thought the theme would be broad enough to offer the children lots of inspiration. The festival is very inclusive, there’s no charge and there are no barriers to taking part. We like to say ‘we have opportunities for every child in Henley’ and we certainly do.”

The festival is for children from age four to 18 and will begin on Saturday, March 11 with the traditional fun run at Swiss Farm, held in conjunction with Go Kids, run by Eileen Unwin, from Fawley.

For the first time this year it will be open to children in years one and two as well as three, four, five and six.

The same day there will be a samba session at the Chiltern Centre for disabled children, off Greys Road, and the gig night at Lovibonds brewery.

Other events throughout the week include the junior proms at Shiplake College and the popular proms, entertain, sing, dance and young dancer events at the Kenton Theatre in New Street.

New this year will be Art in the Square in Market Place on March 18 from noon to 3pm where Dr Squabbles will arrive in his red van full of objects that children can use to create a piece of art.

There is also the young reporter competition, run in conjunction with the Henley Standard.

Henley Mayor Julian Brookes, who attended the launch, said: “The youth festival is a great opportunity for children to show how creative they can be and to express themselves outside their school environment.”

The festival needs more young volunteers to help with presenting, light and sound, backstage and front of house. For more information, email hyfinfo@gmail.com