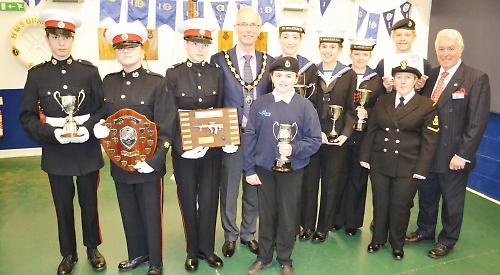 HENLEY’S Sea Cadets were honoured for their hard work and dedication at the unit’s annual presentation evening.

More than 30 guests attended the event at the unit’s base off Wargrave Road and Henley Mayor Julian Brookes carried out an inspection of the ship’s company.

Petty Officer Abigail Bollon, officer in charge, gave a review of the past year before the trophies were presented by the Mayor.

Ordinary cadet Josie Day, who has been the Mayor’s cadet for his year in office, was named cadet of the year.

The coxswain of the year award went to marine cadet 2 Sian Page, while marine cadet 2 Marshall Stanbridge-Bennett was awarded the best attendance and turnout trophy.

Most improved cadet was able cadet Sophia Riley and cadet first class Charlotte Searles was named the most outstanding cadet of 2016.

PO Bollon said: “These awards are to recognise the hard work and dedication of our cadets.

“It’s good for morale and very important to show the cadets how valued they are as I think it gives them a sense of purpose. A unit is only as good as its cadets and staff.

“We’re a great unit in a fantastic location and we have some amazing staff and cadets. Being in such a great location, we have a large collection of boats.

“I’d like to thank all the staff and cadets for all the hard work. We all make this unit what it is and long may it continue.”

She paid tribute to the previous officer in charge, Chief Petty Officer Kelly Searles, who left in September.

PO Bollon told the guests that the unit would be getting a second RS Quest dinghy to add to the one it received in June, helping the cadets train for competitions.

The Mayor, a former Royal Navy engineer, said: “It’s a few years since I was in the sea cadets and I’m very happy to hear the tradition continues.

“If you’re thinking of joining the navy the great thing I found is it doesn’t just teach you life skills but also a trade.

“I was an electrical engineer and it took them seven years before they let me loose with a nuclear reactor under water!

“I’d like to thank everyone involved in the unit. I compliment you all on the work you do here.” Lionel Scott, president of Henley Rotary Club, presented a cheque for £1,000 to the unit and Tony Horsefall, chairman of the Phyllis Court Singers, gave a cheque for £450.

The unit has a junior section for children aged 10 to 12 and a senior section for 12- to 18-year-olds who take part in community events, including selling poppies on behalf of the Royal British Legion and helping at the Henley Festival.

The senior section meets on Mondays and Fridays from 7.20pm to 9.30pm and the juniors on Fridays.

If you are interested in joining, drop in or email info@henleysea
cadets.org