You could be firefighter like me, says mother of twins 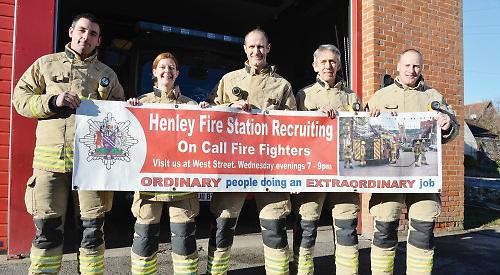 A CAMPAIGN has been launched to recruit more part-time firefighters for Henley fire station.

This is to give the crews a break and ensure that the fire engine can respond to emergencies all the time instead of the 80 per cent of the time that it is currently available.

On-call or retained firefighters, who make up 60 per cent of Oxfordshire’s operational fire and rescue service, have other jobs but are available to answer an emergency call.

He said: “We have people who move on if they find another job or if they move house so we need a constant flow of new recruits.

“The more firefighters you have got, the better it is for the firefighters on station because they can get a better work/life balance.

“We manage the crew the best we can but some people might be on annual leave or there might be sickness, which puts more pressure on them and their families. We would really encourage more people to join up. There’s no upper age limit but you need to be physically fit. It’s a fantastic role – the spirit at Henley fire station is amazing and they are a good bunch.

“A lot of employers may be worried that if a member of their staff becomes an on-call firefighter, they will be called out all the time but that’s not the case.

“The benefits of getting a fully qualified firefighter who can help with fire safety in the workplace, a trained first aider and someone with even stronger team skills more than makes up for the two to three call-outs a week.”

Henley fire station’s newest recruit is Bec Meachin, the mother of 22-month-old twins Annabel and Freddie, who joined in September.

Mrs Meachin, 36, said: “I’ve always been interested in joining but my fitness levels have never been high enough.

“When I had my twins I decided I needed to work on that.

“I used to walk past the fire station a lot going to the doctors and thought ‘maybe that’s something I can do’. Being an on-call firefighter really works for me as a mother because I can fit it around my own hours — it’s not something you have to do 9 to 5 every day.

“It’s probably one of the most worthwhile jobs you can do. No matter what sort of job you get, you’re going out and helping others, which I’m passionate about.

“It’s really exciting being on call. You have a pager and suddenly it will go off and you have to get to the station within five minutes and you have no clue what the job is going to be. It could be a false alarm, a roaring fire or a road traffic collision.”

Mrs Meachin, of Ancastle Green, Henley, is the station’s only female firefighter but said: “If there are other women who want to join they shouldn’t be concerned about that — I’m not treated any differently and there’s a really good atmosphere.

“If anyone’s thinking ‘it’s not for me’ they should give it a go. It’s open to men and women, mums and dads — it doesn’t matter what job you do.

“I’m only a small person and I still managed to get through all the
processes.”

Two people are currently going through the recruitment process and Henley also has station support officer Nick Windsor, a full-time member of staff, who splits his time between the Henley and Watlington stations.

The firefighters meet for training on Wednesdays from 7pm to 9pm.

Mr Reay said: “The crews do checks on the fire engine, making sure all the equipment is in tip-top condition.

“We also do work in the community, such as safety and wellbeing visits in people’s homes.

“We check people’s smoke alarms and we check to see if there are any slip, trip or fall hazards in their home.”

On average, retained firefighters earn £5,000 to £9,000 a year and they receive the same training as full-time firefighters.

If you’re 18 or over and live or work within close proximity of the fire station, you can apply.

Applications are now open for the training course starting in June and anyone interested is encouraged to visit the station’s drill night to chat with the crew.