As we're living longer, care is changing for the better 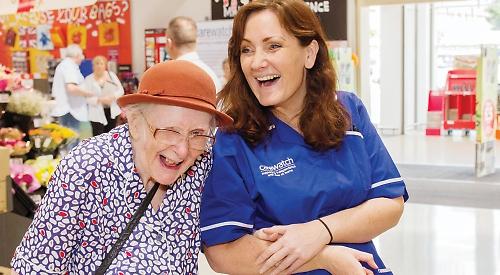 THE lack of beds at the new Townlands Memorial Hospital and the growing amount of care housing being planned for Henley have caused concern.

A former town councillor even suggested that the town was becoming the “Eastbourne of the Chilterns”.

But one resident doesn’t agree and says the change in the way we care for elderly people is a trend and the best for patients.

Stephen Unsworth, 53, is managing director of outpatient care and nursing agency Carewatch, which has more than 150 offices across Britain and arranges 15 million home visits every year.

He says that treating patients at home rather than in hospital is meeting a genuine need and has become a priority for both government and the health service.

It is why the new £10 millon hospital was chosen to operate an “ambulatory care” model with an outpatient rapid access care unit rather than having beds like the old Townlands, although that was planned at first.

The unit, which finally opened on Monday after a series of delays, offers services including antibiotic treatment and transfusions and will operate alongside the hospital’s existing minor injuries unit, podiatry, outpatient clinics and physiotherapy and out-of-hours GP services.

Those who need inpatient care can be admitted to one of eight “step-up” beds at the neighbouring Chilterns Court care home, which is run by the Orders of St John Care Trust and was built as part of the hospital redevelopment.

Mr Unsworth, who has lived in Henley for 10 years, says the new model is more efficient and will enable many patients, especially those who are elderly or infirm, to recover more quickly.

He says: “I completely understand the logic behind what they’ve done and am a huge supporter.

“From a public image perspective, I can appreciate why some traditionalists want to see people treated in beds as it’s how these things used to be done and they believe it’s still the best arrangement.

“However, I’m sure they would reconsider if they appreciated the astronomical cost of supporting people in hospital and the negative impact of unnecessary stays.

“It’s well known that even two days in hospital can have knock-on effects which prolong patients’ illnesses.

“If we can treat acute problems by getting people back into their homes with community practioners offering the same level of care you’d get in hospital, we’ll be in a much stronger place. In years to come we will realise how lucky we are to have a facility like Townlands on our doorstep. I travel all over the country and there are very few towns that can boast anything like it. People should feel safe and supported.”

Mr Unsworth says it is becoming increasingly common for home carers to be trained in some nursing skills and, in turn, some nurses are learning skills previously held only by doctors.

This means the overall standard of outpatient care is improving and a stay in hospital is becoming less necessary.

Furthermore, technological advances mean patients can be monitored remotely using equipment installed in their home and they can even download smartphone apps which will match them with carers.

This helps to identify and treat health problems in their early stages so patients don’t need more specialist attention.

Mr Unsworth says: “It’s very clear that our population is living longer and growing older in higher numbers than ever but I believe the NHS remains second to none in its acute care services.

“When someone is discharged from hospital, the carer can go out and support them in the community. They can now live semi-independently with the help of assistive technology.

“Carewatch is constantly evolving as a business and has seen huge advances in technology. We’re quite pragmatic about the need to continually look at new ways of working.”

Meanwhile, he says that having more private care housing in Henley will also alleviate pressure on the public sector.

The Henley and Harpsden neighbourhood plan says building affordable housing is the town’s highest priority and that the 64-bed Chilterns Court, which replaced the Chilterns End care home off Greys Road, should meet the needs of the elderly.

Despite this, McCarthy & Stone has been granted planning permission for 53 “extra care” flats at the former Jet garage site in Reading Road, which was earmarked for 55 regular flats, including 22 affordable units. Henthames, of Essex, has been given consent for an 80-bed care home at the former LA Fitness gym premises off Newtown Road, which shut in August 2015.

Yet the neighbourhood plan said this site, along with the rest of the Newtown Road industrial estate, should remain primarily employment land.

B&M Care plans to turn the former Henley Youth Centre site off Deanfield Avenue into a 60-bed care home, although it has yet to submit a planning application.

Mr Unsworth says: “There is a need for these care homes. Many of the older, traditional ones have multiple storeys, no lifts and no disabled access or facilities so they’re going out of business while the need for them continues growing significantly.

“My only concern for those establishments is that they must pay their staff enough to provide a sustainable service and keep turnover low because Henley is quite an expensive town.

“When I worked as a regional manager for BUPA we were aware of how important that was. Henley will be drawing on bigger towns like Reading and Oxford so they will have to get that right.

“As a father with daughters in their early twenties I do worry about their ability to afford property, particularly in this area. Even the Government’s ‘help to buy’ scheme isn’t particularly helpful in the South because property prices are that much higher — the limit of £250,000 won’t buy very much.

“However, while there’s undeniably a shortage of affordable housing in Henley, there is also a lot of pressure on social care. The Chancellor’s autumn statement made various pledges on housing but didn’t mention increased funding for our sector, which astonished me and sent shockwaves through the industry.”

Mr Unsworth grew up near Manchester and started work as a carer at age 19 before training as a psychiatric nurse. He secured his first managerial role in the NHS at 27 and left shortly afterwards to study business at the University of Manchester.

He then worked for the Priory psychiatric hospital in Altrincham before becoming manager of a nearby care home. From there he worked for several operators at increasingly senior levels including BUPA, for whom he was a regional manager when he moved to Henley.

Mr Unsworth says: “My father was an engineer by trade and as a youngster I had a real interest in maths and physics. I even did double maths at
A-level and was going to study mechanical engineering at Liverpool but when I went to an open day I realised it wasn’t for me. A friend who was a student nurse then told me about the benefits and how rewarding it was, so I pursued that path and I’ve not worked in another industry since.

“My time on the front line made me more confident as a manager. It gave me a bit of gravitas because I knew the job my staff were doing. I was never asking them to do something I hadn’t done before or wasn’t capable of doing.”

Between 2010 and 2014 Mr Unsworth was a freelance management consultant for Buckinghamshire County Council, which was closing its in-house adult social care services due to budget cuts. He worked with Ernst & Young to set up a separate trading company which enabled the council to buy services from outside providers.

He says: “It was a highly successful transfer that saved about £400,000 a year. It was a challenge for me because I was previously working in healthcare and nursing management but it’s all about people skills.

“I just applied the processes I’d learned in earlier roles and made clear to the staff who were being made redundant that other, more flexible opportunities were still available. There was a very good take-up.”

He then joined Carewatch, which serves a range of clients, including the elderly, people with mental health conditions and those with physical or learning disabilities.

Mr Unsworth says: “The first year was tough because I had to get used to working within the financial constraints of a business that’s mostly led by local authorities, all of which are looking to save money.

“I’m really enjoying it now, though. I’ve got a great team around me and am confident that we are delivering thousands of hours of high-quality care safely and effectively.”

Last year he became a trustee of the Chiltern Centre for disabled children and young adults in Henley and now advises the charity on governance and compliance.

He says: “It’s a wonderful service in a beautiful location which supports users and their families with privacy and dignity.

“One of the biggest challenges it faces, in common with the wider industry, is maintaining good staffing levels. It pays well above the national minimum wage but it’s hard getting people to see that there are good career opportunities in the care sector.

“A lot of negative stories are reported about the care sector but there are many safeguarding measures in place and the day-to-day reality of care is a very positive one.

“I would urge anyone who is honest and wants to make a real difference in society to consider exploring it further.”