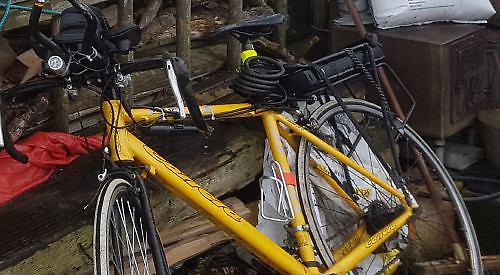 A COUPLE are offering a cash reward for the safe return of two electric bikes that were stolen from a park in Henley.

Jessica and Nic Sinclair had secured the machines to a bench in Mill Meadows overnight on Wednesday last week while they stayed on a houseboat moored at Rod Eyot Island.

But when they woke the next morning and looked out of a window they noticed the bikes had vanished.

One machine was a yellow Carrera Road Pro with an electric motor and battery pannier rack and the other was a black Cyclotricity Sahara Cruiser electric bike with battery.

Both had been secured to the bench with a lock and the bikes locked together with a heavy duty Litelok.

Mrs Sinclair said: “We generally bring them on to the island but it was so cold we decided to leave them secured to the bench. We used three locks — a lock on each bike to secure them to the bench and one to lock them together.

“We got up at about 7am and looked out of the window to find that they were missing. We scanned all of Mill Meadows and we did not find any evidence — none at all.

“Our theory is that it was a deliberate act by fairly professional people with the right tools.

“It would have taken two people to carry the bikes out connected as the battery packs and motor wheels make them especially heavy and I expect a van would have been used to take them away.”

The couple, who live in Henley, have reported the theft to the police who are reviewing footage from nearby CCTV cameras.

Mrs Sinclair said she suspected the theft may have been planned after hearing splashes and shouting nearby earlier in the week.

She said: “It was freezing cold and you would never hear splashing and shouting at that time of night. We think that maybe they were seeing how fast we would react.

“If anyone noticed the same group of people over a few nights in the park then do get in touch or contact the police. There are not usually many people around at that time.”

The Sinclairs do not own a car and used their bikes to travel between their house and the river, around town and further afield and to go shopping and get to work.

Mrs Sinclair, a massage therapist and owner of the Treatment Rooms at the Red Lion Hotel in Hart Street, and her husband, a website developer, say the bicycles would cost about £2,000 to replace.

The couple are offering a “substantial” reward for any information that leads to their recovery. Mrs Sinclair said: “Please help us find our unique and much-beloved bikes.”