'Rob had passion with a capacity to love like nobody else' 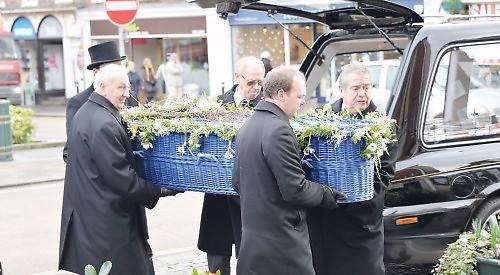 HUNDREDS of people attended the funeral of a Henley pub landlord who died suddenly.

Rob Myles-Hooton, 41, suffered a fatal brain haemorrhage while working on his boat Lola Belle at the Hobbs of Henley boatyard, off Wargrave Road, on January 16.

He had run the Old Bell pub in Bell Street with his wife Pamela since 2013.

His funeral took place at Henley town hall on Monday, exactly six months after the couple were married at the same venue.

Among the mourners were veteran singer Vince Hill and Bill Dobson, who ran the Brakspear pub from 2009 until his barman Mr Myles-Hooton took over.

Mr Myles-Hooton’s blue wicker coffin, which was chosen by his wife as it matched the colour of his eyes and many of his shirts, was decorated with flowers by Jo Wise, who runs the Floral Circus in Benson.

It was carried into the top hall at the town hall by friends Stuart Mullins, Doug Carnihan, Jon Venus, Patrick Batty, Paul MacInnes and his brother-in-law Ken Palmer.

Mourners stood as the procession made its way into the room, where all the seating was taken so people were standing around the edge.

The service was presided over by celebrant Josie Williams.

She welcomed the guests, saying: “It’s wonderful to see so many of you here to celebrate the life of Rob Myles-Hooton.

“We meet here today to honour his memory, pay tribute to him and say goodbye. We do not all know each other but we are linked together by Rob’s life.

“Before we begin, I would like to thank you all on behalf of Pam and Rob’s family for all the cards and messages since Rob’s passing. So many wonderful things have been said.”

The couple married seven years after Pamela moved to Henley and started going to the pub, where Rob worked behind the bar, to make friends.

Mrs Myles-Hooton said: “Rob was truly the love of my life.  He was quite literally the best thing that ever happened to me. We loved each other and were excited about our life in the future.

“He was a man of great integrity, passion and wit with a capacity to love like nobody I have ever met. As well as being generous, he was so much fun to be with — he made me and many others laugh.”

Mrs Myles-Hooton said her husband had been diagnosed with arteriovenous malformation, or AVM, a tangle of blood vessels in the brain, in August 2014 following a seizure. He underwent surgery in June last year.

She spoke about the couple’s Chinese crested dogs, Lucy and Sassy, and their plans to open a vegan café in Reading.

She also recalled having “made the first move” when she invited Rob over for a “nightcap”.

Mrs Myles-Hooton said: “He was my favourite person in the whole world. We were a team and loved to spend time together, whether it was working to feed people, getting together on one of our date nights or simply trying to make it through a film without me falling asleep.

“Rob was a huge influence on my life. He taught me to accept who I am and not who I wanted to be. Rob completed me. I had never felt so loved. It was the best feeling in the world.”

She added: “This is one of the hardest things I have ever done.”

A slideshow of photographs of Mr Myles-Hooton was then shown on a projector screen while Drops of Jupiter by Train was played.

Close friend Lainey Fraser read messages, cards and tributes that had been sent to Mrs Myles-Hooton about her husband.

Then Ms Williams recounted the publican’s life, starting with his growing up in Chearsley, near Aylesbury, where he lived until he was 19.

“The school report said he was a happy child but perhaps a bit too carefree,” she said. In 1993 he began working at Unwins wine merchants in Thame before moving to the Henley branch.

He then worked at the Queen’s Head pub in Duke Street, which is now Pachangas restaurant, where Mr Dobson was then landlord.

He ran the Henley internet café and worked at the Three Horseshoes in Reading Road before returning to work with Mr Dobson when he took took over the Old Bell.

Ms Williams spoke about Mr Myles-Hooton’s passion for music, gadgets and the video game Star Wars Commander, for which he was a member of one of the world’s top-ranked teams.

She said: “If someone was having a hard time he would do everything he could to help them, even with limited resources. He was exceptionally well thought of. No words can describe the feeling of loss felt by his close family and friends.”

The couple’s friend Rebecca Eadie told some stories before  Mr Hill recalled how he and his wife Annie, who died in September, would visit the pub and Mr Myles-Hooton would make them feel
welcome.

He said: “In the last year or so of her life, Annie was in a wheelchair. When we turned up for lunch Rob would be there, run out from behind the bar and hold open two doors to welcome us in.

“He would make sure she was comfortable. He always did his best to make her feel a million dollars.”

Mr Hill told how Mr Myles-Hooton had helped him set up a new sound system in his home in Shiplake and they listened to vinyl records there together.

In a message to Mrs Myles-Hooton, he said: “When you lose the one you love, the one you expected to spend your whole life with, it’s the hardest thing in the world.

“The healing doesn’t start here, it starts when you get home, when you walk into that place where you lived and they are not there in the kitchen.

“He is there really but he is there in spirit. I think what Rob would say now is talk to your friends. We are all here so we should talk as much as we can. Go out and spend time with them when you’re ready.”

Mr Dobson said: “Rob came to work at the Queen’s Head in 2002 and he was there for five years so I got to know him well. He always went out of his way to help people. When I took on the Old Bell the first person I thought of was Rob.

“It was smaller and allowed him to be at the centre of it. I had never seen Rob more happy than on his wedding day.”

Another slideshow of photos of Mr Myles-Hooton was accompanied by Elbow’s One Day Like This.

Ms Williams said: “Rob, we have paid tribute with our memories of your life and your kindness. We remember your skill, achievement, wisdom and good humour. With love, we now leave you in peace.”

Then singer Megan Henwood performed Suzanne by Leonard Cohen, which she had performed at the couple’s wedding.

Finally, Ms Williams read a message to the mourners on behalf of Mrs Myles-Hooton, saying: “Rob accepted me and turned my life around. It seems when I found you, it was me I found. Your spirit will shine for a long time.”

Mrs Myles-Hooton thanked Gill Byrne and Steve Robson for organising the messages and Spud Hudson for the slide shows, Shaun Thompson and Rob Kaziewicz for the pictures around the hall as well as Olivia Grace Shanahan.

A collection for the charity Butterfly AVM raised £867.

Afterwards, close family and friends travelled to the woodland burial ground in Rotherfield Greys for the interment.