Women who want everyone to enjoy thrill of gardening 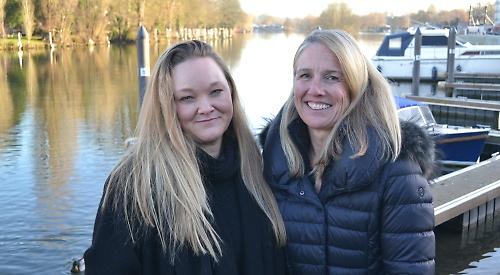 AS they waited to pick up their sons from school, Victoria Newton and Jane Macfarlane Duckworth got talking.

Both had an interest in gardening and were soon chatting about it, so they became friends.

That was almost seven years ago but laid the seed for what was to grow into a new Henley festival that attracts thousands of visitors.

Chelsea Fringe is an alternative festival of flowers, gardens and gardening which runs concurrently with the main festival and beyond.

Since it started in 2012, it has grown to events not only in London but in towns and cities across Britain and abroad.

Henley’s first involvement was in 2014 when Mrs Newton, who lives in Peppard, and Ms Macfarlane Duckworth, from Hambleden, put a boat filled with flowers on display in Market Place.

This year, there will be more than 10 events between May 20 and June 4, including a floral flotilla on the River Thames, meditative walks at Greys Court and, new this year, a “green” trail and a community feast. Most of the events will be free to attend.

The 43-year-old former City trader can still recall that conversation in 2010 at Rupert House School in Henley where her son Theo and Mrs Newton’s son Oscar, now both 10, were classmates.

She says: “We struck up a conversation and the key focus of this was this idea of where we live and the impact of it on the horticultural world.

“We have fantastic private gardens, gardeners, designers and specialist nurseries, growers and florists.

“The local gardening resources are really almost incomparable to other parts of the country, apart from perhaps Devon.”

After her divorce in 2011, she changed direction and set up the Flower Union, a collective of artists, florists and British flower growers who aim to bring people together through flowers.

It specialises in British, organic, heritage, specialist and unusual flowers and, as well as individuals, its clients include businesses, magazines, fashion houses, photographers and film and television companies.

Ms Macfarlane Duckworth says: “I decided I wanted to do something that was based on kindness and I started to work with flowers. At the time I lived in a big house with a big old garden in Little Marlow and I was able to grow lots of flowers.

“I started off doing flowers for friends — for birthdays, weddings and parties — and for the local church.

“Then I did a shoot for the fashion designer Valentino and that led to other fashion work, where I would do the flowers.

“It got to the point where I didn’t have enough flowers and I then I started looking for other growers.

“I would literally go round to the growers and collect flowers from them and deliver these to other florists in London.”

Her flowers have been on display at Selfridges and Claridge’s Hotel in London and were part of the Royal Arch at last year’s Chelsea Flower Show. Her work has featured in the Financial Times’s How to Spend It magazine for the last four years.

Ms Macfarlane Duckworth says: “I really enjoy it and feel very satisfied to make a living doing something I enjoy. It has been good for me mentally, physically and socially. I’ve met lots of people along the way who I wouldn’t have met in my old life, which was very different.”

Mrs Newton, 47, is married with two children and works in the gardens at Greys Court, the National Trust property near Rotherfield Greys on a voluntary basis.

She used to work for exploration and production company Conoco Phillips as environmental manager at its oil refinery in Grimsby for seven years.

She then joined British Airways, again as its environmental manager, and was in Brussels immediately after the September 11 attacks working with the European Commission on the impact of increased security.

She says: “Because of the impact of the Twin Towers attack, the company was encouraging people to work less.

“There were all sorts of programmes to work part-time and I took advantage of that. After I had my daughter Georgia in 2003, I returned part-time.”

Mrs Newton remained at British Airways until 2008 when she set up a web-based carbon offsetting company with her husband Barry and two former colleagues from BA.

She says: “It was of the moment and proved not to be the answer but it was a great opportunity to engage with people and start talking about the impact on their lives.”

After having Oscar, she decided she wanted to give back to the community and undertake voluntary work, so she volunteered for one day a week in the garden at Greys Court spreading manure, pruning, weeding and raking gravel.

Now she helps to manage and improve the estate’s environmental impact and works in volunteer support to ensure the relationship between the management and helpers works well. She is also a volunteer at the Garden Museum in Lambeth, which is currently undergoing a multi-million pound refurbishment.

She was with Ms Macfarlane Duckworth when they had their first experience of Chelsea Fringe in 2013.

Mrs Newton recalls: “It was a community garden next to the Emirates Stadium [in north London]. We listened to poetry in the garden performed by a man with no clothes on!”

The following year, they staged their boat display in Henley but realised that if they were to stage a proper satellite event it would require more thought and effort.

Mrs Newton says: “If we were going to do something it was obviously going to take proper organisation but we were encouraged by the interest and enthusiasm from people in the town.

“I think we were trying to make horticulture a little bit more accessible — that really is the ethos of the Fringe. It’s using the garden for health, play, education, food and employment.

“We started talking about how we could showcase that and bring it to people’s attention. There’s this huge breadth and range of horticultural expertise.”

The women have secured some core supporters, including Chelsea Fringe founder and director Tim Richardson, garden writer Liz Ware and Jo Wise, who runs the Floral Circus at Oakley Wood, near Benson.

Ms Macfarlane Duckworth says: “I thought of all the people I’d come across from my work who would understand and support it. We made contact with them and a variety of them became involved.”

The event has also been supported by Henley in Bloom and the Henley Allotments Association.

Mrs Newton says: “It’s not about us coming up with all these events and running it ourselves. We explain to people the ethos and those that get it go off and do their own events.”

The floral flotilla has become the highlight of the Fringe and this year the women hope to have more than 25 decorated boats taking part.

Mrs Newton says: “What we want is a mix of all types of craft, from paddle boards to paddle steamers.”