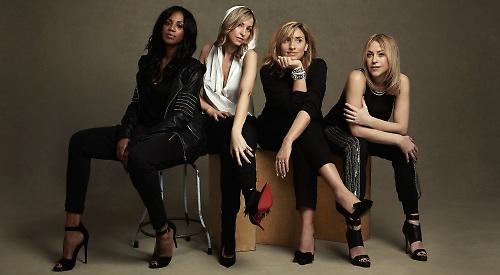 THE full line-up for this year’s Henley Festival has been announced.

Jess Glynne, Pet Shop Boys, Goldie, Chaka Khan and All Saints are the headline acts of the five-day music and arts extravaganza in July.

There will also be early evening acts on the “floating” stage, appearances by 25 comedians, a mini version of Ronnie Scott’s famous jazz club and food offerings to suit all tastes.

Singer Glynne will open the festival on July 5 and will perform her string of UK number one hits, including Hold My Hand and Don't Be So Hard on Yourself.

She will be followed on Thursday by the Pet Shop Boys, who will stage their acclaimed Super Tour show.

Together Neil Tenant and Chris Lowe have sold more than 50 million records worldwide, have won three Brit Awards and have been nominated for six Grammy’s.

Since 1985 they have achieved 42 top 30 singles and 22 top 10 hits in the UK, notching four number ones, including West End Girls.

They also scored a hit with What Have I Done to Deserve This?, a duet with singer Dusty Springfield, who is buried at St Mary’s Church in Henley.

On Friday, Chaka Khan, who is widely celebrated as the Queen of Funk, will perform some choice cuts from a musical career spanning five decades, which is sure to include I’m Every Woman and Ain’t Nobody.

Saturday night sees Goldie, the father of UK Drum and Bass, presenting an orchestral version of his ground-breaking 1995 Album Timeless, performed by The Heritage Orchestra.

On the final night, All Saints will close the festival.

One of the most successful girl groups of all time, they scored hits with Never Ever and Under the Bridge.

The festival acts were announced to 150 friends, patrons and sponsors at a launch party at Stonor Park on Monday night.

There was a big cheer when the festival’s artistic director Stewart Collins revealed that the Pet Shop Boys would perform.

He said the festival has managed to persuade the duo to perform after seeing them at the Royal Opera House after last year’s festival calling it the “most remarkable” show.

Chaka Khan and Jess Glynne also went down well with guests but the announcement of Goldie performing with the Heritage Orchestra was less well received but there were cheers when Mr Collins announced that All Saints would close the festival.

Mr Collins aid: “This year it’s rich, beautiful, in depth and creamy and all those wonderful adjectives which I’m not allowed to write in the programme anymore!

“It’s great to see you all here and thank you to the Stonor family for having us.”

The Children’s Society, which helps vulnerable youngsters, is the festival's chosen charity for the year.

Its chief executive Matthew Reed spoke about its work and its support for young carers.

He said: “I’m absolutely delighted that for the second year the Children’s Society is the partner for the festival. My thanks for all that you have done over the last 12 months to partner with us and work with us.

“These are wonderful, amazing young people who, as well as being a child and a young person, have a significant caring role. What we do is we try and support these young people so they can have a great childhood and they can thrive and flourish.

“The work you are doing is enabling us to reach more young people.”

The festival was last launched at Stonor Park in 2012.

The heir to the Stonor Park estate, the William Stonor, said: “It’s great to be part of it - we were really honoured that they asked to do the launch here.

“The festival is one of the key events for Henley and the whole region and it’s wonderful to be part of it in a small way.

Mr Stonor said he was looking forward to the Pet Shops Boys and Ruby Turner’s performance.

New to the festival this year will be a series of early evening concerts on the “floating” stage before the headline acts including The Band featuring Beverley Knight, Vonda Shepard, Gino Washington, Ruby Turner and Brother Strutt.

Restaurants popping up at the festival will include The Spice Merchant and The Dog & Badger alongside street food from Jimmy Garcia’s BBQ club, Newquay Sushi, Snob Lobster and Champagne, Pizza Express and Awesome Crispy Squid.

Henley will once again host the UK’s largest pop-up restaurant, with catering maestros The Dish serving 800 covers a night at the atmospheric Riverside Restaurant.

Ronnie Scott’s will be making the festival its home for the full five days and visitors will be seated at cabaret-style tables where they will be able to watch performances by the stellar Ronnie Scott’s All Stars while waiters serve cocktails and show-stopping food from Caper & Berry.

The nightclub for this year again is Pure Heaven, kicking off the dancing each night as soon as the headline act finishes on the floating stage.

There will be a pyrotechnics and light spectacular with #daytonight, which culminates each evening with a “moment” where art in the day transitions to art at night and the whole festival site becomes part of the installation using fire and light.

An all new line-up of weird and wonderful street performers will be roaming the festival again this year. The troupe of roving street entertainers will include street art and theatre, musicians, and cabaret acts. From walking works of art La Galerie to moustachioed on “Beach Patrol” as well as a life-sized, fire-breathing, horse robot, to a human red carpet, the bewitching troupe of street performers will interact with guests offering them delights, surprises, and mesmerising performances throughout the festival.

The Sunday family day returns children can interact with outdoor theatre in a greenhouse, with The Little Gardener. Former Britain’s Got Talent contestant Bruce Airhead and a adventure with Tommy Foggo – Superhero will perform all the festival grounds.

The 35th annual black-tie festival will run from July 5 to 9.

Tickets will go on general sale from on February 17th.