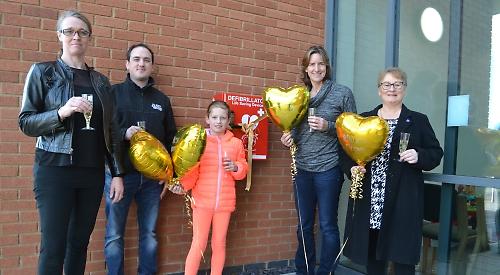 The rower officially opened the life-saving device yesterday at the new Townlands Memorial Hospital in Henley.

She was joined by the charity’s founder Sarah Roberts and her 10-year-old daughter Millie, who has a heart and lung condition and was the inspiration behind the appeal.

Miss Roberts, of King’s Road, had golden balloons with messages reading “Millie’s Dream 50th” made for the unveiling by Temptations gift shop in Bell Street.

The milestone was toasted with glasses of sparkling apple juice.

Grainger, who won a gold medal at the London 2012 Olympics, is a patron of the appeal.

She said: “I can’t believe it’s been three years since we started this campaign. The original plan was that if we could get 12 defibrillators it would be a huge success so I can’t believe we have got to 50 and there’s more to come.”

Miss Roberts said: “I’m delighted that we have managed to combine the opening of this amazing new hospital in Henley with another Millie’s Dream defibrillator.

“I want to give an enormous thank-you to our patron Dame Katherine Grainger for her amazing contribution to the charity. She was there when we started and is still here for the 50th installation. I hope she can join us on the 100th too!”

For more information on the appeal or to donate visit www.facebook.com/milliesdreamuk