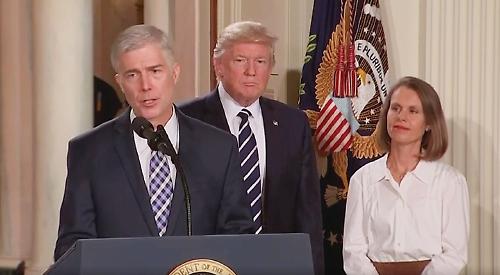 THERE’S a good chance that among the illustrious visitors to this year’s Henley Royal Regatta will be a senior American judge.

Neil Gorsuch is the youngest person to be nominated for the Supreme Court by new American president Donald Trump.

This prompted a champagne celebration at Bryan and Prudence Burletson’s home in Remenham as 49-year-old Mr Gorsuch is their son-in-law.

Their daughter Louise, 48, met him on a blind date in 1995 while Mr Gorsuch was a student at Oxford University and the couple were married at St Nicholas’ Church in the village the following year.

They now live in Boulder, Colorado, with their two daughters.

He said: “For the Burletson family Neil was welcomed from day one. Always a loving and totally supporting boyfriend, he rapidly became very popular with everyone he met.

“Particularly keen on fishing and rowing, it also helped that he has always been a great anglophile and a major fan of Winston Churchill. Whatever the future, Henley remains a favourite destination for the whole Gorsuch family with Henley regatta inevitably an added bonus.”

Mrs Burletson said the family was “very proud” but admitted to being “apprehensive” as her son-in-law faces a confirmation process that is expected to be bitterly contested by Democrats in the Senate.

She told The Daily Telegraph: “It’s a happy occasion but it’s also quite terrifying because it’s going to be vicious. There’s going to be blood on the carpet but that’s politics I suppose. So I’m thrilled but I’m a bit apprehensive.”

Mrs Burletson said that the couple had not talked to the family about Mr Trump before the nomination was announced.

“They are both Republicans, obviously, but everybody asks me if she was a Trump supporter and neither of them commented much,” she said.

If confirmed by the Senate, Mr Gorsuch, a Colorado federal appeals court judge, would restore the Supreme Court’s conservative majority, which was lost upon the death of Justice Antonin Scalia. The court has the final legal word on many of the most sensitive issues, including abortion and gun control.

The Democratic leader in the Senate has said he has “very serious doubts” about the nomination.

Mr Trump said Judge Gorsuch had a “superb intellect, an unparalleled legal education and a commitment to interpreting the constitution according to text”.

He was picked from a shortlist of 21 possibles, which Mr Trump made public during his election campaign.

Accepting the nomination, Mr Gorsuch said: “It is the role of judges to apply, not alter, the work of the people’s representatives.

“A judge who likes every outcome he reaches is very likely a bad judge, stretching for results he prefers rather than those the law demands.”

Judge Gorsuch is a so-called originalist, meaning he believes the US constitution should be followed as the Founding Fathers intended.

Mrs Gorsuch was christened at Hurley Church and educated at Rupert House School in Henley, St Mary’s, Wantage, and the Abbey School in Reading.

She was awarded a history degree at Southampton University and subsequently an MPhil in business studies at Christchurch, Oxford.

While at Southampton she became keen on eventing and, while at Oxford, became a member of the university equestrian team.

She went on to achieve a half-blue when Oxford won the inter-university championships.

Mr Gorsuch was a Marshall scholar at University College, taking a doctorate.

The couple were married in June 1996 at the church where Mrs Gorsuch had been a member of the choir as a child.

Many of her husband’s family and friends flew over for the occasion.

After the wedding the couple returned to Washington where, according to her father, Mrs Gorsuch carried on where she had left off — immersed in animals, particularly horses and dogs, riding and running most days.

When Mr Gorsuch was nominated as a federal appeals judge 10 years ago the family moved to Colorado, where he had been brought up.