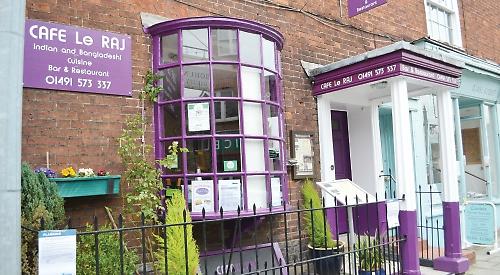 A COUNCILLOR has called for a Henley restaurant to be closed down for being “unneighbourly”.

Councillor Kellie Hinton criticised Cafe Le Raj in Reading Road after hearing how its new outdoor extraction system had made life a misery for the woman who lives in a flat above.

Sue Turner, who also runs the Candela hypnotherapy clinic next door, said the system was “ghastly” and “rumbled like a ship’s engine”.

She was speaking at a meeting of Henley Town Council’s planning committee, which was considering an application for retrospective planning permission for the extraction system by restaurant co-owner Badshah Mia.

Mr Mia was granted permission by South Oxfordshire District Council, the planning authority, in 2015 but the extraction system was not installed according to the plans.

Mrs Turner told the committee: “There is a development of four shops and I have lived there since 1978.

“I currently have a curry house on each side.

“When Cafe Le Raj went ahead with the external plans last year, it was pretty unneighbourly.

“There was rubble out the front and there would be rubble against other cars. They did whatever they liked. I was not surprised when they broke their planning conditions.

“They will probably have to take the extractor down because it is huge and it is about 15ft from my bathroom window. It rumbles like a ship’s engine and it is vast.

“It is really ghastly looking. It affects everyone in the area. When I talk to the neighbours they say how bothered they are by it.”

Mrs Turner said she had contacted the district council’s planning department to ask for someone to come and see the problem but was told an officer could only visit during office hours, when the restaurant isn’t open.

She said: “They need to be told how to behave and the planning department needs to see what is going on but they are cooking after 5pm or at weekends when there is no one on duty.

“All the fumes from the restaurant are coming into my house and it’s greasy and smoky. They really do not care about the neighbours.”

Councillor Kellie Hinton said: “They need to get environmental health in there. It’s disgusting and I don’t know how a place like that is even still open and allowed to carry on.

“If people only knew the kind of things that were going on and what they were putting their neighbours through.

“It’s unneighbourly, overlooking, there is noise pollution and there are environmental reasons to refuse this. A good place to start would be to close it down.”

Councillor Jane Smewing said: “They should do what they said they were going to do.”

Committee chairman Simon Smith said: “I suggest we insist they comply with the existing application.”

A design and access statement by Raja Hussain, of HSS UK Ductwork, of Reading, said: “Residential properties around the building will not have any objections to this as the existing flue was much larger in size and was not complying with the environmental health.

“The smaller flue will be less visible and will work as efficiently as the existing flue as the fan and filters will remain the same.

“No alterations will be made to the inside of the property, only changes to the outside flue.”

Meanwhile, a food store that was erected in the restaurant’s garden must be taken down after the district council refused a retrospective application in December.

Mr Mia applied for permission for the white PVC-clad shed in October after it had already been built.

Planning officer Tom Wyatt said: “The proposed development, owing to its design, scale and external appearance, fails to preserve or enhance the character and appearance of the surrounding conservation area and has an adverse impact on the setting of the adjoining listed buildings.”

Abdus Salam, of Tuns Lane, Henley, who co-owns Café Le Raj, told the Henley Standard that a noise assessment had been completed prior to the original application.

“The report said the noise levels were okay,” he said. “The council came here to monitor it and they did not say it was bad.   If the council has a problem they can come and talk to us. The neighbours can see the noise report.”