Lovers are looking to gain the 'whip hand' 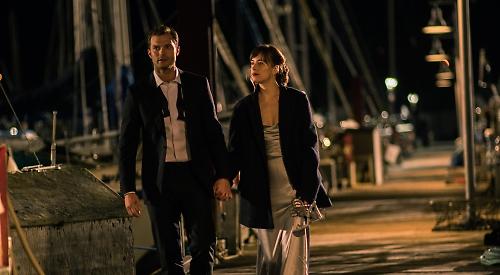 THE prospect of titillation and eroticism making it on to our screens in mainstream cinema always seems to go down well with audiences.

I wonder why? Perhaps us reserved Brits are more adventurous than we care to admit.

The latter was one of the highest grossing films of 1992, but forget Douglas and the saucy Sharon Stone — the mantle has well and truly passed to Jamie Dornan and Dakota Johnson. The pair return as Christian Grey and Anastasia Steele in Fifty Shades Darker, the second chapter based on the worldwide bestselling “Fifty Shades” phenomenon.

Expanding upon events set in motion in 2015’s blockbuster that grossed more than $560 million globally, the new installment arrives for Valentine’s Day and this is a film that will be best enjoyed on date night.

When a wounded Grey tries to entice a cautious Steele back into his life, she demands a new arrangement before she will give him another chance.

As the two begin to build trust and find stability, shadowy figures from Christian’s past start to circle the couple, determined to destroy their hopes for a future together.

The good news is that many familiar characters return and fans will take comfort in the fact the film is still very much based on EL James’s popular novels.

Director James Foley has form in the psychological thriller genre with 1996’s Fear and 2007’s Perfect Stranger. With the story already there for him, this shouldn’t be hard to pull off.