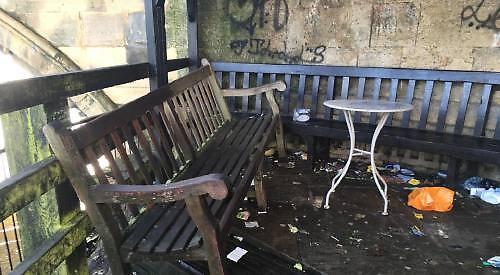 A HOTELIER has called for CCTV to be installed at a riverside beauty spot in Henley after it was targeted by vandals.

Sam Gill, owner of the Red Lion Hotel, was speaking after the graffiti attack at Red Lion Lawn, which the hotel leases from the town council to serve customers refreshments.

Tags were sprayed on the Grade I listed Henley Bridge, a bench was ripped from its fittings and rubbish was thrown around.

The council closed the area on Thursday last week after the damage was spotted by Richard Pinches, of Marlow Road, who posted pictures of the vandalism on social media and blamed “mindless” individuals.

The council’s parks services team cleaned up the area by removing the litter, securing the bench and carefully removing the graffiti so the area could be re-opened to the public.

The entrance gate has a notice saying “this area is monitored by CCTV” but in fact the cameras on the Angel on the Bridge pub opposite don’t cover Red Lion Lawn itself.

Mr Gill said: “It would be great to have security cameras there. I think CCTV has quite a massive impact in general and it’s a good thing.”

Henley Mayor Julian Brookes said he was “very, very disappointed” by the vandalism. He said: “Areas like this should be open to everyone, so it’s disappointing that somebody is abusing that privilege.

“We will work in partnership with the Red Lion to ensure the space is kept in the best possible condition for the enjoyment of the people of Henley and visitors.”

But he added: “Do we really have to resort to CCTV in every nook and cranny in the town? I don’t want to overreact — we need to monitor the situation. If it’s repeatedly abused, we’ll have to consider alternatives.” Former mayor Ken Arlett, of Elizabeth Road, Henley, asked for guarantees that the council’s parks staff would check the area more often, saying the damage must have taken place over a long period of time.

He didn’t rule out CCTV, saying the council would evaluate “all options”.

Councillor Hamilton said: “It’s our land so we have to make sure it’s kept clean. We have got to keep a close eye on this area and ensure that this doesn’t happen again.

“What happens with graffiti is if you leave it people add to it. We’re keen to make sure the town is in a pristine condition because we care.”

Rosalind Steed called it “despicable” and Charlie-Rose White said there was “absolutely no excuse” for it.

Kirstin Egan said: “That is just awful. Sickening and upsetting. They need a surveillance camera on now.”

Adam Williamson said: “I used to love that place, it’s like one of those forgotten bits of Henley. Shame people can’t look after it.”