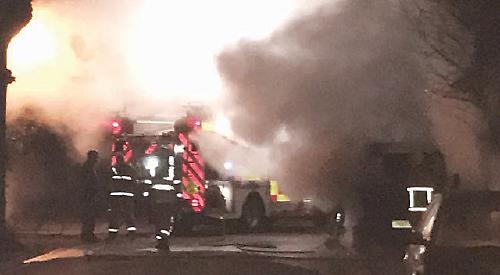 A WOMAN was left distraught after her 4x4 vehicle was destroyed in a fire, writes David White.

The Land Rover Defender was parked near her home in St Andrew’s Road, Henley, when it went up in flames at about 7pm on Friday.

The 22-year-old, who lives with her parents, had arrived home after visiting stables near Checkendon when neighbours spotted smoke coming from the vehicle and alerted her.

Her mother, who didn’t want to be named, said: “Someone noticed it and knocked on the door. The fire was in the engine, under the bonnet.”

The family rushed outside and tried in vain to control the flames with a fire extinguisher.

They were helped by several neighbours and town councillor David Eggleton as the street was filled with billowing grey smoke.

Mr Eggleton, who was driving from Tesco back to his home in Gainsborough Road when he spotted the fire, said: “There was a glow and lots of people standing around. I didn’t realise it was a car on fire until I got nearer.

“When I got there it was just in the engine compartment. I thought ‘if I can keep it down enough it’s not going to explode’.” He used two fire extinguishers he keeps in his Ford Transit van to try to contain the fire.

Mr Eggleton said: “It dulled it down. If I’d had another fire extinguisher or two I probably would have got it out.

“Once my extinguishers had run out the fire just restarted and by then it was in the main cabin of the car. I just had to stand back and I couldn’t do anything else.”

The mother said: “They did contain it for a little bit but then it just went up with a full tank of fuel.

“I don’t know what could have gone wrong. It had just had its MOT and had a lot of work done on it.” She said the vehicle had been fitted with new tyres and steps and and was her daughter’s “pride and joy”.

“We’d lent her money for it and she just loved it,” she said. “She had always wanted a Defender. It even chokes me up because I know how much she loved this car.

“She was heartbroken, absolutely distraught. It’s like losing part of the family, it really is.”

A fire engine from Caversham Road fire station in Reading arrived after about 20 minutes and the crew extinguished the blaze within minutes.

The Land Rover was towed away on Saturday morning.