How residents saved our cinema from developers 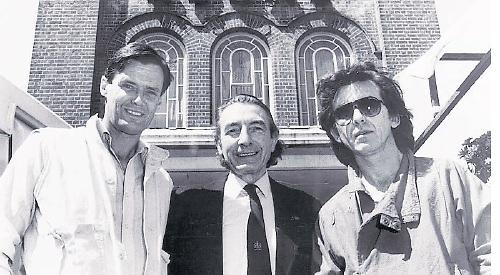 THE Regal Picturehouse cinema in Henley opened exactly 20 years ago on Sunday. The town had been without a cinema for 10 years and, as DAVID WHITE reports, it took a spirited fight to deliver the new one.

TUCKED away in Boroma Way, the Regal may seem like an unassuming venue to those not familiar with its history.

However, it took dedication, passion and a good deal of political wrangling to ensure its creation following the closure of Henley’s old cinema in the mid-Eighties.

Supermarket giant Waitrose had wanted to knock down the venue, which had stood in Bell Street since 1937, and replace it with a supermarket but was forced to change its plans following a public outcry.

The campaign to keep a cinema even garnered the support of George and Olivia Harrison, of Friar Park, who joined a protest against the closure in June 1986.

The following month the former Beatle stated his concerns in an open letter to the Henley Standard.

The Save the Regal Trust was also established in the hope of buying the cinema and re-opening the venue.

Although the activism of the Harrisons and other members of the community was unable to save the old cinema, the strength of public feeling meant a new venue was included in the redevelopment plans.

The three-screen Regal was built on part of the site of the original Regal/Odeon cinema which was demolished in 1993 but it was several years before an operator could be found.

In the meantime, the Kenton Theatre in New Street screened films for the town.

Gordon Mintern was general manager of the original cinema from 1952 until its closure. It had been owned by Odeon but was bought by Henley Picturehouse, which also owned a cinema in Marlow.

Mr Mintern, now 94 and living in The Close, Henley, recalls: “I was with the company in the Midlands but my home was in Bristol and I didn’t really like the Midlands.

“I was offered a job in Jersey which attracted me but that closed down because it was very seasonal.

“They wanted a manager for Henley. I thought it was a very nice cinema — we had about 1,000 seats. The highlight used to be the regular midnight matinées we had. We used to try to get the stars to come along.

“It was all very sad when it closed, very sad. It was a fantastic old building but things change, don’t they? People used to come to the cinema regularly every week but now they shop for a film they want to see.

“I think it was a question of money. Waitrose made a big offer for the site and so the company decided to sell.”

Mr Mintern was set to retire when the cinema closed as he had reached the age of 65 but he continued to show films at the Kenton in the interim using a single projector.

He said he liked the town’s current cinema and even advised that a third screen be built when the plans were revealed.

He said: “We had two screens and shops underneath originally but they never materialised and I said, ‘there’s room for a small screen and we finished up with three.”

The new cinema finally opened its doors on February 26, 1997 with a gala premiere of The Crucible and also screened Jerry Maguire, Mars Attacks! and Matilda during its opening week.

About 150 people attended the opening where the then Mayor, the late Terry Buckett, cut a reel of film to open the new building.

His widow Pauline Buckett, who was with him, recalls: “It was a great evening. I can remember watching The Crucible and we were allowed to take our drinks into the cinema to watch it.

“I thought it was a fantastic place and just what the town needed. Terry was thrilled when it was actually built. He was very proud to open it.”

The Mayor was pictured on the front page of the Henley Standard wearing a tuxedo at the opening.

Mrs Buckett says: “He would have gone and bought that — he never owned one before he became mayor!”

A plaque in the cinema still marks the occasion.

Mrs Buckett, who lost her husband in 2009, says: “It means a lot to me and to the rest of the family. At the end of the day Terry did a lot for the town. I’m very pleased the cinema’s still going, I didn’t realise it had been as long as it has. The years just fly by.”

Today’s cinema-goers can also thank Henley Residents’ Group for its part in the story.

The group was formed in 1989 in response to the town centre redevelopment plan, which many residents opposed. Two years later it won eight seats on the council and three on South Oxfordshire District Council.

Its protests at the closure of the old Regal led to the developers including a new cinema and also ensured the town council provided financial support so the cinema operated in the long-term.

Party leader and former mayor Gill Dodds, who was one of the group’s founders, remembers that there had been no mention of a new cinema in the plans by Arundel Properties.

She says: “We thought the development for Henley was inappropriate. It was pastiche architecture.

“We tapped into something because there were marches and protests and parish polls. We tapped into the feeling that Henley was becoming a developer’s playground.

“The cinema had closed. It was a lovely old building that had been closed for years and years. There was no hope of ever getting it open in the state it was in.”

A meeting was held around May 1989, chaired by barrister and author Sir John Mortimer, who lived in
Turville.

Mrs Dodds recalls: “Hundreds of people turned up and the town clerk at the time was absolutely gobsmacked. Waitrose basically said, ‘what do you want, what will shut you up?’ We said, ‘just a smaller, more sensitive development and a cinema’.

“What we have got is brilliant. I think it was a really happy solution and the residents’ group was born out of the inappropriate development. We’re so lucky that we have got all these things and it’s only because people fought for them and use them now so it’s quite special really.

“It wouldn’t have happened without the residents’ group fighting. It’s another one of the things that we’re really proud of.

“My husband Malcolm and I are members of the Picturehouse and go very often. I think the range of films is terrific and I think the special things they offer, like National Theatre productions, are absolutely wonderful. My friends in Marlow come to Henley because they haven’t got a cinema.

“I think that if you talked to anyone in the town, they would say it’s a wonderful facility. You can drop your kids off there as it’s safe and you can have parties there.”

Mrs Dodds didn’t think the cinema would last as long as it has. She explains: “It was the video era and everybody thought cinemas would die but because there are such good films and it’s such a pleasant place to go, it has gone from strength to strength.”

Metro Tartan Distribution were the first operators of the cinema until it was taken over by City Screen (the Picturehouse Cinemas chain) in December 2005 and then in 2012 became part of the Cineworld group.

Melissa Macfarlane, who has been the Regal’s general manager for the last 15 years, said: “We’re just so lucky to have been supported so well over the last 20 years.

“I started in 1999 as the assistant manager, so it had only been open two years and I’ve seen an awful lot of changes since then.”

These changes included the switch from 35mm to digital film with the cinema getting its first digital projector in 2008, which also enabled it to show 3D films.

The cinema also has showings of “screen art” including live opera, ballets and National Theatre productions.

Mrs Macfarlane said: “We’re so well supported by older audiences and they don’t have to go into London as they can see it in Henley live.”

The cinema also has monthly shows for mothers and babies and runs pop-up screenings in Mill Meadows in the summer. A membership scheme introduced in 2005 now has 7,000 members.

Mrs Macfarlane added: “The Regal shows a diverse range of films and screen arts for our customers and is appealing to a range of people.

“I’ve always said that or such a small market town Henley is very lucky to have a cinema.”