Time to bone up on the 'MonsterVerse' 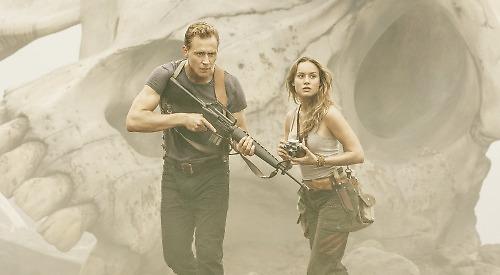 AS Kong: Skull Island rampages its way onto our screens this week, the question on many film fans’ lips may be “Why?”

After Peter Jackson’s three-hour epic King Kong a little over 10 years ago it’s initially hard to see why director Jordan Vogt-Roberts is bothering with a rehash of this well-trodden tale.

Dig a little deeper, though, and all soon becomes clear — and perhaps depressingly so for some audiences.

Let’s be clear: it’s doubtful this film will break any cinematic ground, stick with you long after you leave the cinema or leave you questioning our fragile existence on this planet. The primary motive here is simple — money.

The film serves as the second film in Legendary Pictures’ so-called MonsterVerse, and takes place before the events depicted in 2014’s Godzilla.

It tells the story of a diverse team of scientists, soldiers and adventurers uniting to explore a mythical, uncharted island in the Pacific — as dangerous as it is beautiful. Cut off from everything they know, the team ventures into the domain of the mighty Kong, igniting the ultimate battle between man and nature.

As their mission of discovery becomes one of survival, they must fight to escape a primal Eden in which humanity does not belong.

Perhaps I’m being unfair on Vogt-Roberts, who has a solid cast to throw into his version of monster mayhem — with Tom Hiddleston, Samuel L Jackson, John Goodman, Brie Larson and John C Reilly on board.

This promises to be huge amounts of fun too. Pure escapism with eye-popping special effects and high-octane action sequences.

To fully immerse audiences in the mysterious Skull Island, Vogt-Roberts, his cast and crew filmed across three continents over six months, capturing its primordial landscapes on Oahu, Hawaii (where filming commenced), on Australia’s Gold Coast, and finally in Vietnam, where filming took place across multiple locations, some of which have never before been seen on film.

Let’s hope the performances are just as strong. The leading men and women are more than capable but the director, whose previous efforts include coming-of-age comedy-drama The Kings of Summer, will need to get the best from them.