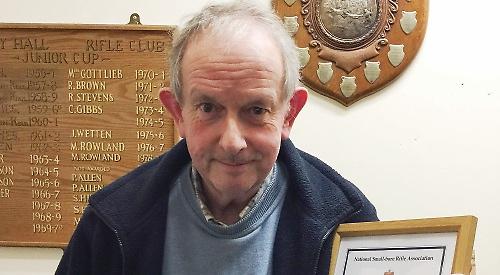 The medal and certificate were presented to him at a recent committee meeting by club chairman Mike Hamblin.

John won the club’s Junior Cup in 1976. He has served as competition secretary and club captain for longer than he or other members can remember.

During that time, he has organised teams for the Oxfordshire and Berkshire winter leagues, marking up target cards and submitting shot cards to scorers.

As membership increased and interest in shooting progressed, the club expanded into short range summer league competition and John has carried out the same tasks.

He has promoted the Berkshire and Oxfordshire county summer meetings and is one of the club’s regular participants at these and the NSRA national meeting.

The task of bringing the polished silver to the annual prize-giving ceremony falls to John. This is partly rewarded by his enviable marksmanship, earning him the right to take some of it back home.

He has won the Oxfordshire League Individual Cup and shoots for the Berkshire County Team. He has also won the club championship many times since 1995.