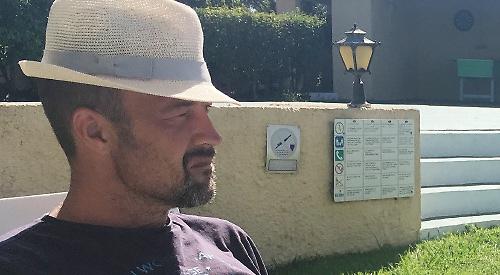 He died doing something he loved most, tinkering in his workshop.

Whether it was fixing something or planting seeds for his wonderful kitchen garden on the estate he managed or, most likely, creating unique and beautiful wood turnings for his favourite people, he was where he loved to be.

Mark was born on July 17, 1973 at the Royal Berkshire Hospital in Reading to Mick and Brenda Sayer.

He went to Badgemore Primary School in Henley and Gillotts School.

As a boy, he loved playing football but his favourite hobby was fishing. He spent many hours fishing all around Henley and even spent a Christmas Day and as many days as possible fishing.

It brought him close to nature and he was happy just observing life all around him.

Mark became an extremely talented wood turner, creating unique and beautiful pieces which adorned his and his closest friends’ homes. He had sold many in the last few years to friends and at Christmas fairs to raise money for Badgemore Pre-School, which his sons had attended.

His main passions were gardening and playing for his beloved pool team at the Salisbury Club in Henley.

In more than 25 years of playing pool, he entered all types of competitions and won the Henley League Cup with his team seven times. He was extremely proud when he became captain in the last year.

Mark loved Henley and worked on many gardens and projects around the town in many capacities, perfecting his talents and his encyclopaedic knowledge of plants.

He could identify almost everything and would often be found offering assistance or advice to those around him. He touched so many.

Mark married his teenage sweetheart Jade in 2003 and they were together for 24 years.

He was a devoted and loving husband and a wonderful hands-on dad to their two sons, Hudson, seven, and Mackenzie, four, who simply adored him.

He also leaves behind his mother, two brothers, nephews and a niece and a large extended family, whom he would have done anything for.

Mark was a beautiful, kind and gentle soul who took life as it came. He wasn’t materialistic and knew the real value of life.

So many warmed to him as he was comfortable just being, whether that was with the rich and eccentric or the intellectual, he had an ability to bring out a person’s real character and see the genuine person beneath.

Although he has been cruelly taken away from us, he wouldn’t want us to be unhappy, so please join us in celebrating his life.

Mark’s funeral will take place at St Mary’s Church in Hart Street on Wednesday, March 22 at 10am.

A reception will be held afterwards at the Salisbury Club in Queen Street. All welcome. Please park in the station car park.

Dress code smart and respectable. No flowers but any donations (if not already given via Justgiving) can be made in Mark and Jade’s name to the burns unit at Stoke Mandeville Hospital.

The family would like to extend their extreme thanks and gratitude for all the kind messages of support and love and a special thank-you to the emergency services, including the air ambulance and everyone who has given generously on the Justgiving page.

All enquiries to funeral directors Tomalin & Son, of Henley.