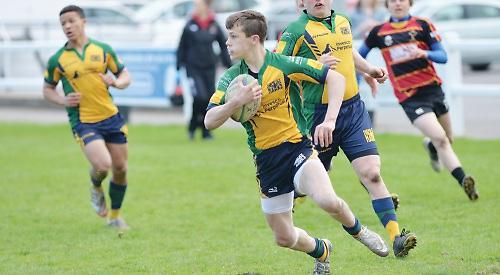 Three tries from hooker Callum Cooke, two conversions and a penalty from fly-half Danny Hawkins were enough to see the Vikings home and deny the visitors a losing bonus point. The result means that Henley top the table with 74 points leaving Newbury just behind on 73 with two matches to play.

The sides had already met earlier in the season, Newbury prevailing 13-8. With both teams having already secured promotion into Division 1 for next season they each knew that the winner of this return fixture would be favourite to secure the title.

Newbury had the best of the opening exchanges and took a 3-0 lead after a penalty kick. Henley quickly responded with two tries from Cooke, deputising at hooker for injured skipper Owyn Thatcher, each set up by clean breaks from Toby Venner and Elliott Quelch respectively. The second of these tries was converted by Hawkins, to give Henley a 12-3 lead midway through the first half.

Newbury responded with a try from a driving maul to close the gap to the hosts leaving the half-time score 12-8.

The ante was upped further by Newbury at the start of the second half. A good spell of continued pressure resulted in another successful penalty kick reducing the hosts’ lead to 12-11. But a combination of handling errors from the away side and committed Henley defence meant that these would be the last points Newbury would score.

The game was settled during a 10-minute spell midway through the second half. Typically choosing to go off the top from the line-out to give ball to their backs, the Henley pack broke with this convention and engineered a third try for Cooke after a 15 metre driving maul from a line-out. This decisive score was converted by Hawkins and he added another three points soon after from a penalty kick to extend the lead to 22-11. The Vikings defence, led by skipper Andy Unsworth, was resolute throughout the final 10 minutes preventing Newbury from any further scores and in doing so denying them a losing bonus point.