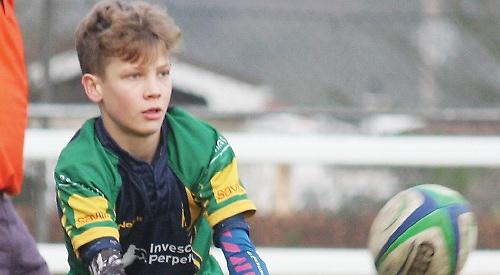 HENLEY Hawks Colts maintained their unbeaten record since Christmas with victory over the south coast club Swanage and Wareham, in a national U17 match.

The win has won the in-form Henley side a place in the South West final at Melksham RFC on March 26.

The match in Wareham was a tense affair with Henley having a sluggish opening few minutes during which time their opponents scored a converted try. The score prompted a determined response with Henley embarking on a foray deep into Swanage and Wareham territory, and from a five-metre scrum number eight James Rhodes scored close to the uprights. Fly-half Jamie Winch converted the try to enable Henley to draw level and then he made a half-break to secure space for Hugo Matthews to score a try under the posts. Winch’s conversion and a missed penalty by Swanage and Wareham meant Henley had an important 14-7 lead going into the second half.

Swanage and Wareham hit back in the second half as they scored a second converted try to draw level. Midway through the half Henley began to show glimpses of their best form and man-of-the-match Alex O’Brien showed the way when he broke from outside the 22 and brushed off defenders to score an important try which Winch converted to place Henley 21-14 ahead.

The momentum was maintained soon afterwards when a quickly-taken penalty resulted in the ball moving rapidly through the hands to Henry Heath who scored in the corner. Swanage and Wareham stormed back into the Henley half and they scored their third try as Henley failed to retain the ball in their own 22.

Henley’s determination to finish the game on a high themselves resulted in a stirring run from Kieran Jeffs to set up a ruck near the opposition’s line and after several goes at their line the crucial final try was scored by Rhodes who went over on the final whistle.