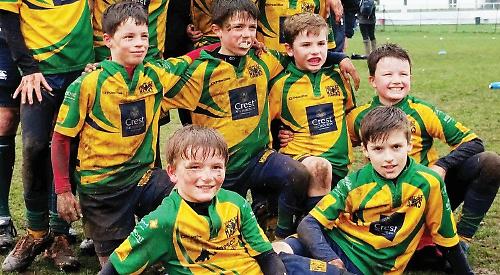 Having entered a London festival to face some new challenges and play some other teams the Hawks were drawn against local rivals Beaconsfield in their first pool game. In a tight and physical game the Hawks ran out 1-0 winners with Will Corbett going over in the corner late in the second half.

Next up the Hawks faced Richmond who they swept aside 8-1. Playing some of their best rugby this season and moving the ball wide at pace the Hawks scored three early tries through Charlie Hunt, Jake Williams and Seb Bourne. A brace from Finn Hawkes out on the wing saw the Hawks go into half-time with a 5-0 lead. In the second half Seb Bourne completed his own brace of tries with a blistering run and Tom Yeoman and Olly Goforth capped the emphatic 8-1 win.

The final pool game was against a big and pacey Blackheath side who had won their two pool games and with a place in the pool winners’ final at stake. A hat-trick from Yeoman and a brace from Sam Winters put the Hawks in command and they ran out 7-1 winners. The victory left the Hawks with a final against the winners of the other pool, London Irish.

With the weather now resembling a monsoon, and a big London Irish team to face, the conditions didn’t suit the Hawks’ natural running game. However, the Hawks also had size on their side and Artie Shrimpton and Oscar Thomas rose to the challenge turning over ball at the breakdown and creating holes in the Irish defence.

Corbett settled the nerves with an early try and then a good move saw the ball go down the line and before being quickly recycled by Williams back to Winters at fly half who beat four Irish players making 20 metres before being brought down just before the line. Thomas and Goforth made sure the ball came back quickly before a dummy and run saw Yeoman finish the move diving over for his fifth try of the day. A breakaway score by Irish meant that at 2-1 all was to play for at half-time.

A tight and nervy second half followed before Goforth crashed over from close range with a couple of minutes to go to wrap up a 3-1 victory.