Great music, fantastic venue and fish and chips... I'll definitely be back next year 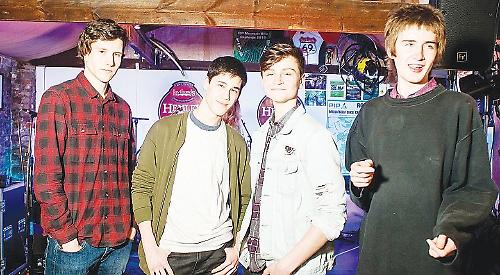 ON March 10 the HYF Gig Night took place at Lovibonds.

It was a great event with a great location, good organisation, timing, food and refreshments and, of course, amazing musicians.

Let’s start with the location, Lovibonds. It was easy to access for locals and everyone outside Henley.

The brewery had the right amount of space inside and out for everyone to enjoy the music and also to fit in a fish and chip van.

Yes, there was a fish and chip van at Gig Night, which was extremely convenient, especially for younger families or children who would normally be having their dinner at this time of the evening.

The food was quite decent and very delicious.

Now, let’s get on to the most important part... the music!

Before the performances I spoke to a Henley College band called Doubt it, comprising Archie Collins, Jonathan Hall and Finlay Burch, all 16, and 17-year-old Tom Pritchard. They said that three of them had been together for two years and the fourth member joined a year ago and that all their songs were cover versions.

They also mentioned how they were mostly excited but still nervous of course.

At the beginning of the night, the performances were all duets and solos while later on all the bands played.

All the acts were fantastic and the styles were mostly classical-pop and rock.

My two personal favourites were Dolly and the Dinosaur, a band, and Maya Rees. I spoke to Maya, 15, after her performance, which included a number of solos and a duet with Lucy Day.

Maya was at the same event last year, so she wasn’t as nervous as some of the others. She played songs with either keyboards or guitar.

Maya has been playing the piano for nine years and spent three years teaching herself the guitar.

Towards the end of the evening I watched Dolly and the Dinosaur perform.

Their songs were mostly originals plus a cover. Their style was rock and was extremely passionate and full of energy.

It was very impressive watching them put all their might into the performance and their confidence was phenomenal.

As a result, it was very enjoyable to watch.

Overall I think the whole evening was a great success for everyone and all the members of the audience that I spoke to — old and young — were glad that they had come.

There is not much HYF could improve on with this event and I will definitely go next year.