Woman raises £1,250 for charity with first half marathon 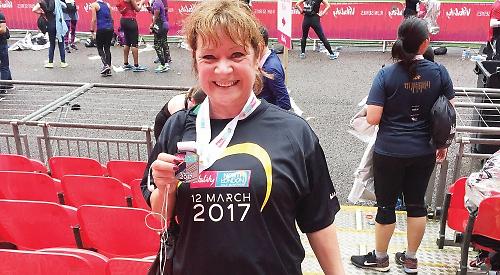 NA WOMAN from Henley raised £1,250 for charity by running her first half marathon.

She believes she could have finished even more quickly but she experienced shortness of breath due to asthma, which forced her to slow down.

The proceeds from her run will go towards Macmillan Cancer Support as the charity’s nurses cared for her mother June in her final days.

Mrs Michel’s husband Trevor drove her to the capital and cheered her on from the stands at Wembley Stadium, where the race started and finished.

When the couple returned home, their daughter Georgia, 19, cooked them a roast dinner.

Mrs Michel, who is a keen runner but had only competed in 5km events previously, said: “I kept a pretty consistent pace for most of the run.

“There were a few hills along the way, which I hadn’t expected, so I slowed myself down to save energy.

“If I’d been running for years I might have felt differently about my time but at my age I’m just very proud that I completed it.

“It was an amazing event as there were lots of bands playing on the way round and the stadium was full of people cheering as we crossed the line.

“I loved running out through the players’ tunnel and hearing the noise of the crowd.

“Funnily enough, I didn’t feel too bad the next day. My legs and toes ached a bit but I was able to walk into work.”

Mrs Michel now plans to take part in another sponsored run with her son Ben, 23.

She said: “I said I’d only do it as a one-off but I really enjoyed it and if I hadn’t been ill I’d probably have enjoyed it even more.”