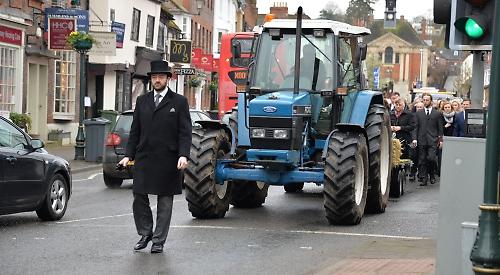 A TRACTOR and trailer led the cortege at the funeral of a man who died in a fire.

Mark Sayer’s coffin was on the trailer as it was pulled slowly through the streets of Henley for the service at St Mary’s Church on Wednesday.

About 30 people joined the procession behind, including his widow Jade and the couple’s sons, Hudson, seven, and Mackenzie, four.

Mr Sayer, 43, a landscape gardener, died in a burning shed in the garden of the family’s home in Gravel Hill on February 27. His death is not being treated as suspicious.

Traffic was slowed as the cortege made its way from funeral directors Tomalin & Sons in Reading Road to the church in Hart Street.

The coffin was adorned with flowers and the trailer had a large white floral tribute reading “BRO”. About 130 people attended the service. The mourners entered the church to the sound of Flying in a Blue Dream by Joe Satriani, Mr Sayer’s favourite guitarist.

The coffin was carried in under a guard of honour using pool cues as he was a keen player and captain of the team at the Salisbury Club in Queen Street.

The service was taken by Rev Canon Martyn Griffiths, rector of Henley and Remenham.

He said: “This building has been part of our community for over a thousand years of history and has seen so much joy and so much sorrow.

“Today we come in sorrow but also in thanksgiving and joy for Mark’s life and all the love, friendship and fun you have shared with him.

“We come to pray for him as he makes his way back to the God who created him and to pray for each other and particularly for Jade and her family as they come to terms with their terrible grief.”

He read a prayer and then Morning Has Broken was sung.

Mrs Sayer gave the eulogy for her husband. They became a couple 24 years ago and were married in 2003.

She said: “Mark, my wonderful, sweet, thoughtful husband. He has been so cruelly taken away from me and us and has left a huge Mark-shaped hole in all our lives.

“He was an amazing, creative, tender and loving man who had so many sides to him. I am all consumed by him and I love him so much.

“We became two halves of each other and he made me feel whole.”

Mrs Sayer told the mourners how they fell for each other while on holiday in France and about when they lived together in their first home in Leaver Road more than 20 years ago.

“He made me appreciate the real value of life,” she said. “It is not about wealth or status, it is about family, love and the world outside your back door. It’s about walking through woods of a field with your family on a spring day.

“We may not have riches or powerful jobs but we centred our lives around each other and our two boys. I will cherish our memories forever.

“He was an incredible father who loved our boys unequivocally. He was their superhero.”

Mrs Sayer told how Hudson and Mackenzie would follow their father around the garden copying him with toys similar to his tools.

Mrs Sayer added: “If he was here with us now he would be overwhelmed and touched by the number of people here today, as I am.

“I am so proud of him and he will be by my side giving me the strength I need. I will miss him so much and I do not know how my heart will mend but I know he would want me and us to be happy.”

Mrs Sayer then placed a red rose on his coffin.

Canon Griffiths gave a reading from St John’s Gospel, which was followed by a reading by Katherine Irving, Mrs Sayer’s mother, of a poem called Don’t Cry For Me.

Mrs Irving, a psychologist, she said: “This is an awfully sad day and it is a celebration of Mark’s life.

“I know how much he loved Jade and the kids. He was a great father and I admired that in him.

“He was always talking about things and I was amazed by the kind of things he thought about and discussed with me. We even covered the psychology of playing pool and how he psyched out his opponents.”

A tribute was then given by Keith Hammant, a friend who had known Mr Sayer for 30 years.

He said: “Mark could get on with people from any walk of life. It was his nature to help people and try to improve things.

“During a conversation you would notice his hand moving to his top lip and his eyes narrow slightly. This was a tell-tale sign that he was into problem-solving mode.”

Mr Hammant, of Gainsborough Hill, Henley, spoke about his friend’s ability to learn quickly, his enthusiasm for new information and his competitive spirit.

He added: “Being competitive was a big part of Mark, whether it was fishing, football or pool — you name it, he would want to win.

“I gave up playing darts with him years ago because he would toy with you, letting you get down to a double, then beat you.

“We spent 30 years winning trophies together — the first was at a football tournament at the YMCA. When we were old enough to go in pubs we started winning on the pool tables.

“Last season the Salisbury Club team won the league and Mark, as captain, potted the last black ball to win it for us on frame difference.”

This was followed by a slide show of photographs of Mr Sayer accompanied by Otis Redding’s Sittin’ on the Dock of the Bay, which reflected his favourite pastime of watching the world go by.

The events shown in the pictures included his time at school, his wedding and the births of his children.

The service ended with prayers led by Canon Griffiths followed by a blessing.

People left the church to the sound of Always Look on the Bright Side of Life, which was from Mr Sayer’s favourite film, The Life of Brian, and summed up his outlook on life.

The funeral was followed by a reception at the Salisbury Club where people were invited to write their memories of Mr Sayer in a book that will be given to his children.

A collection was made for the Stoke Mandeville Hospital burns unit, where Mrs Sayer was treated for the injuries she suffered during the fire.