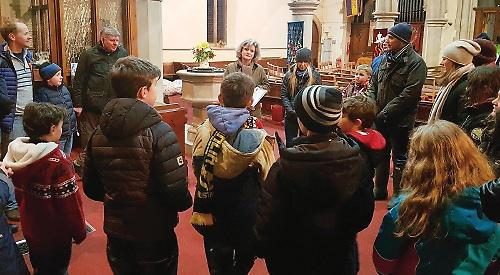 A NIGHT-TIME wildlife walk for friends and families of St Mary’s School in Henley was attended by about 50 people.

The event was hosted by Marika Perkins, the school’s head of science, and Rev Duncan Carter, who opened the doors of Holy Trinity Church so that Mrs Perkins could give a brief welcome and introduce the Dark Night activity.

The walk, held between 8pm and 10pm on Saturday, co-incided with Earth Hour, which encourages individuals, communities, households and businesses to turn off their non-essential lights for one hour.

The walkers were able to study the clear night sky as well as walk through the churchyard and Mill Meadows nature trail around the River & Rowing museum, which are both managed by the Henley Wildlife Group.

Mrs Perkins said the event followed the school’s Plant and Pollinator project, which was run in partnership with the Centre for Ecology and Hydrology in Wallingford. “It was a look at our project area at night time,” she said. “We’re studying the pollinators in the green belt areas of Henley, particularly bees in Trinity churchyard and Marsh Meadows. It was an absolutely perfect night sky.

“Everybody said it would be fantastic to do it more often. It’s really important for the children to be involved in this citizen science and in nationwide projects outside the classroom.”

All participants were asked to complete a Citizen Science survey to explore people’s engagement with the night-time environment and the associated impacts of wellbeing.

Many who responded said they would have liked to have seen the street lights turned off in support of Earth Hour.

The independent school helped contribute to University College London’s pilot citizen science project, Into The Night, which is investigating the effects of artificial light on wildlife and humans.