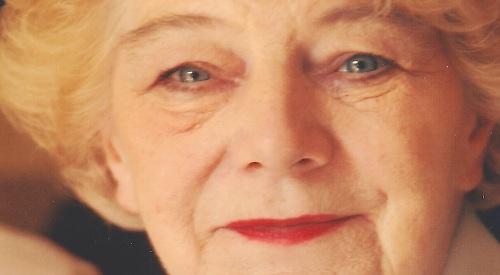 Pam’s guiding principle was “don’t be a passenger in life — you have to participate” and she certainly lived up to this, becoming an accomplished headteacher and businesswoman.

Pam was a talented public speaker and was renowned for being marvellous company. She liked nothing more than to be surrounded by friends, sharing hilarious stories and exaggerated anecdotes.

The second daughter of Welsh parents, Emlyn and Edith Davies, Pam was born and grew up in Sutton Coldfield before attending Leicester University where she studied English and completed her teacher training.

It was at Leicester that Pam, an accomplished tennis player, met Tony Neesam.

The couple were engaged after Pam had completed a year’s teaching at King Edward’s School in Birmingham.

Tony joined the RAF and was posted to Aden, Yemen, and Pam joined him to undertake an RAF teaching role.

It is testament to Pam’s commitment to friendship that many of the friends made in Aden remained throughout her life.

On their return to England, the couple married and Tony worked in marketing for Johnson & Johnson in the North-East, where their daughter Claire was born. In 1965 they moved to Henley, where their second daughter Megan was born.

Pam, then aged 29, was plotting how to juggle a job while looking after her two girls.

She discovered that Miss Bailey was selling St Mary’s and, despite her bank’s initial unwillingness to approve a loan to a young mother, she persisted and the school became hers. This allowed Pam to combine her love of education, her showmanship and her will to develop the potential in others with shrewd business acumen.

Despite Tony’s death just a few years later, Pam continued to lead and inspire at the school for 27 years.

On her retirement, she said: “What a marvellous job I’ve had for all these years!”

She was very proud to be invited to speak at the school’s 90th anniversary in 2016.

In 1973, Pam married BBC news cameraman Peter Beggin and moved to Harpsden with Peter and his three boys, Andrew, Keith and Graham. Peter was killed in a car accident in 1982.

Pam was delighted that her relationship with her children endured and was enhanced when their spouses, Leila, Caro, Kathleen and John joined the family.

Together with her five grandchildren, they were the source of great pride.

Pam sold the school in 1994 and embraced retirement with enthusiasm, throwing herself into new hobbies, particularly bridge, golf and knitting, which brought wonderful new friends from Henley and around the country.

After selling the school she rewarded herself with an uncharacteristically indulgent golfing tour of the world, where she was awarded an ornate ashtray by the organisers in recognition of her prowess.

Not one to sit still, Pam embarked on placements with British Executive Service Overseas to Romania, Kazakhstan and Cameroon to help develop private education, which she said gave her “amazing life experiences”.

Pam lived in Henley for more than 50 years and she loved it.

Her beautiful home and garden in Thames Side, where she lived for 35 years and where she died peacefully with her daughters by her side, personified her love of Henley.

It enabled her to entertain visitors and host great parties and provided a base for her to relish all that Henley had to offer including Phyllis Court Club, where she was a member for 50 years, the regatta, the Kenton Theatre, Henley Festival and particularly Henley Literary Festival, which is run by a past pupil.

Although Pam’s health deteriorated over the last year, she retained an amazing social life, being whisked to events by her great friends.

She was adamant that friendship and thoughtfulness were what living in Henley was all about.

A memorial service for Pam Beggin will be held at the Church of St Mary the Virgin in Henley on Friday, April 7 at 2.30pm, followed by tea and cakes in the Chantry House.

A private (by invitation only) event for family will take place at Phyllis Court Club.