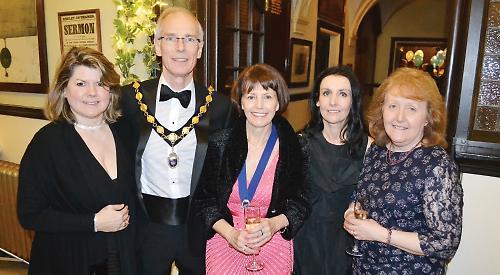 ABOUT £15,000 was raised for charity at the Mayor of Henley’s traditional end-of-year dinner.

Almost 150 people attended the black-tie event at the town hall on Saturday night hosted by Mayor and Mayoress Julian and Gabriele Brookes.

It began with a champagne reception followed by a three-course dinner, a live auction and a silent auction before a speech by BBC director-general Lord Hall, who lives in Henley, and performances by Elysium III and children from the Henley Music School.

The proceeds will go to the Mayor’s three chosen charities for his year of office, Henley YMCA, the Riverside Counselling Service and the Nomad youth and community project.

Councillor Brookes said: “It went extremely well, so thank you to everybody who contributed and the people who gave us prizes for the auctions and raffles and to council staff Paula-Price Davies, Leena Wisely and Helen Barnett, who helped organise it.”