'No terrorist attack is going to disrupt our democracy' 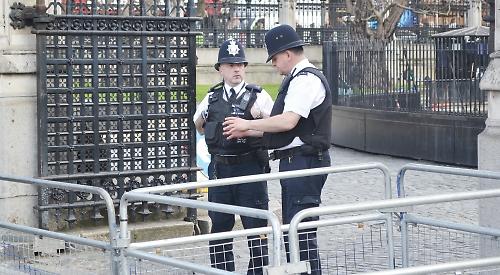 KEEPING calm and carrying on is the order of the day at Parliament following last month’s terror attack, according to John Howell.

The Henley MP and scores of his colleagues were locked inside the House of Commons for almost five hours after the incident, which left four bystanders dead and more than 50 others injured.

Despite the prevailing mood of shock and revulsion, Mr Howell says getting back to business at Parliament is important as it shows Britain will not let terrorism affect day-to-day life.

At 2.40pm on March 22, Khalid Masood mounted the pavement on Westminster Bridge while driving a rented Hyundai 4x4. He ploughed through a crowd of pedestrians at over 70mph, mowing many down and forcing others to leap off the bridge into the River Thames.

The 52-year-old British citizen, who had a violent criminal record and had served time in prison, then crashed into the railings surrounding the Palace of Westminster. He ran through the main gates and stabbed unarmed police officer Keith Palmer with a knife before being shot dead by armed police.

Paramedics and passers-by, including foreign minister Tobias Ellwood, fought to resuscitate Pc Palmer but he died at the scene.

Two British nationals and an American tourist were killed on the bridge while a dozen of the remaining victims are said to have suffered “catastrophic” injuries.

The Metropolitan Police is treating it as a terrorist attack. Investigators believe Masood, who was born Adrian Elms and changed his name after converting to Islam in 2005, acted alone but may have been inspired by the online propaganda of radical Islamist group ISIS.

Mr Howell and about 100 other MPs had been voting on a series of amendments to the Pensions Bill when Lindsay Hoyle, the Deputy Speaker, announced at 2.45pm that proceedings were suspended.

At this stage, they were only told that a “serious incident” had occurred. A few minutes later, the House was adjourned for the day but members were told to wait inside.

The chamber was then locked by police, which is standard procedure in an emergency. About 1,000 members of staff, official visitors and members of the public were shut in other parts of the building or moved to Westminster Abbey. Prime Minister Theresa May was rushed to a waiting car by police and driven to safety.

Mr Howell recalled: “It all happened pretty quickly. The Deputy Speaker came in four or five more times in quick succession to give us updates, which many of us were already gathering from our mobile phones. We hadn’t heard a thing because you can’t once you’re inside, but as time went on we gradually found out what had happened and just how serious it was.

“The first reaction was of horror and almost disbelief — I say ‘almost’ because we’re under high security all the time and under the full expectation that a terrorist attack will happen as we are a prime target. There was, of course, also great sadness at learning a police officer had been killed.

“I was impressed by how quickly the building had gone into lockdown within minutes of it occurring. The efficiency of the whole operation was just exemplary. Armed police were everywhere because at that stage nobody knew just what we were facing. They didn’t know if the attack was a distraction for something bigger, or whether there were other attackers or even a bomb in the building.

“The atmosphere inside was quite good — it was very cordial. Faced with a common threat, MPs behaved very calmly and patiently. We all chatted with one another and not necessarily just with those on the same side of the chamber. In view of what was going on and our inability to help, that was all we could do.

“Fortunately, the division lobbies were open so we still had access to toilets and water but we had been warned that we would be there for some time until the building had been swept and confirmed as safe.

“The police reported back to the Speaker and the Leader of the House periodically to tell them what was going on and at one point they brought a few snacks in as it was getting late and we hadn’t eaten in a while.” Members were finally allowed to leave at about 7.30pm, at which point Mr Howell briefly returned to his office at Portcullis House, which is across the road, before retiring to his flat nearby.

The next morning, the Commons was full of members in a show of solidarity and defiance. The Rev Rose Hudson-Wilkin, the Speaker’s chaplain, read Psalm 23 while Mrs May condemned the “depraved” attack, offering prayers to the victims and promising that Britain would “never allow the voices of hate and evil to drive us apart.” Both were greeted with enthusiastic applause.

Mr Howell said: “It was one of the most moving experiences I’ve ever had in the House. It summed up so perfectly what we were all thinking.

“We then resumed as normal as soon as we could in order to show we were back in business. Questions were put to the relevant ministers as usual and life carried on.

“It is important that this remains an open place. Members of the public have an access right and under no circumstances should that be curtailed.

“To be perfectly frank, it shows that no terrorist attack is going to disrupt our democracy and the way we go about things.”

Mr Howell did not know Pc Palmer personally but said he was a familiar face to everyone and would be greatly missed.

The officer’s funeral will take place at Southwark Cathedral but the night beforehand his body will lay in rest at Parliament’s St Mary’s Undercroft, where Margaret Thatcher lay before her burial in 2013.

Mr Howell said: “It is a fitting tribute to a loyal and valued Parliamentary servant. We all knew him from entering the palace and exchanging greetings on the way in. It made the attack feel that much more personal as he really was one of us.”

Meanwhile Mr Ellwood, a former Army infantry captain, is to be appointed to Her Majesty’s Privy Council for his intervention.

Mr Howell said: “I have spoken to Mr Ellwood and I think the whole House has expressed its feeling that he was a real hero for what he did.

“He was in the right place at the right time but the fact that he stepped in speaks volumes about the sort of man he is. He is very quiet but throughly competent and it is entirely appropriate that he be made a Privy Counsellor.

“Of course, all of the emergency services deserve to be praised for acting so quickly and so professionally.”

Although the Palace is patrolled by armed guards, both inside and out, Mr Howell said security had not noticeably increased since the attack.

The building remains accessible to tour groups, who undergo airport-style security checks before they are let in, while the vehicle gates Masood entered are open as usual. The police officers at the gates wear knife-proof jackets but still do not carry weapons, although colleagues carrying sub-machine guns are on hand nearby.

Mr Howell said: “Without wishing to be crass, the system worked very well. The perpetrator was shot and it’s a tribute to the civility of all concerned that he was treated in the same way as his victim.

“There is a system of barriers and he did not get very far before he was stopped. It would not be practical to close the gates because of the number of vehicles that come and go every day. While there are doubtless lessons to be learned, this place is not exactly short of armed police officers.

“Members feel very safe here — if anything, the biggest issue is the danger they face outside Parliament, as we saw with the murder of Jo Cox. In fact, a tremendous amount of effort is going into making sure that MPs have the best possible protection at their homes.”

Hundreds of floral tributes have been laid in Parliament Square along with candles, cards and messages of condolence. They include placards calling for peace between the different cultures living in Britain.

Mr Howell said: “In terms of reducing the risk of things like this, I think we have to reduce tensions and the amount of hate crime, which means working on all sides of the cultural divide. I know that might be an unpopular message but I deplore all hate crime and feel it fosters the kind of activity that a terrorist is likely to take to.

“I would stress that I’m not blaming hate crime for terrorism, which would be completely wrong, but it creates the kind of conditions that help it to thrive.”