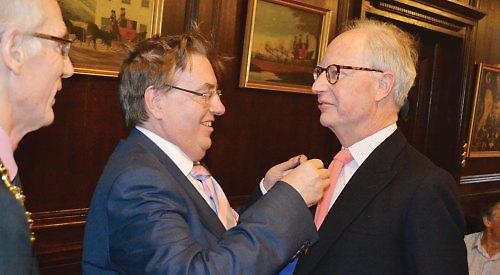 AN “unsung hero” and the most successful rowing club in the world have been awarded this year’s Henley town medal.

Ian Forster, 85, of Elizabeth Road, was honoured for almost half a century of volunteering for community organisations while Leander Club received the corporate award.

The medals were presented by Henley MP John Howell during the annual town meeting on Thursday last week.

Mr Forster is the longest-serving member of the Henley Lions, with 43 years, and has volunteered for the Henley Round Table, where he was chairman, and the 41 Club, helping to raise money for charities and good causes.

He was also, until recently, a driver for the Henley HandyBus.

Mr Forster, a retired design engineer, attended the meeting with his wife Ruth and there was a loud cheer from the audience in the council chamber when his name was announced.

Mayor Julian Brookes said: “He’s the archetypal unsung hero. He has helped so many people and not sought any recognition for himself. We have been very fortunate to have someone like Ian.” Mr Forster, who was nominated by former mayor Ken Arlett, who also lives in Elizabeth Road, said he was surprised to win the award.

“I’m very proud and quite embarrassed,” he said. “I had a phone call from the Mayor who said, ‘I’d like to say you’ve won the town medal’ and I said, ‘I beg your pardon!’

“I’m very moved and honoured. Having been in the Lions for 40 years, I think it’s recognition for the club as well. Your immediate thoughts are of 20 or 30 other people in the town who work so hard.” Mr Forster helped set up the Lions’ annual Swimarathon in which teams swim lengths of the Henley leisure centre pool to raise money for charity and good causes.

He has also supported the Henley May Fair and the Christmas Festival and sold tickets for fund-raisers including Santa’s Grotto at Toad Hall garden centre.

He helps out at the Henley Regatta for the Disabled and the annual Mencap barbecue and organises day trips and theatre outings for the elderly. He has also been his local area Neighbourhood Watch co-ordinator for more than 15 years.

Leander Club, which was founded in 1818 and established in Henley in 1897, was honoured for years of success in rowing.

It is the most successful sports club of its kind in the world, having won a total of 123 Olympic medals, including gold in the men’s eight and silvers in the women’s eight and double sculls at the Games in Rio last year, which involved 12 Leander athletes.

The Mayor said: “Leander is a shining light for the town and the Heroes’ Return was one of the sporting highlights of the civic year.

“Leander Club continues to be the leading provider of rowing athletes for the Great Britain team and the world’s most successful rowing club.”

Club chairman Hugh Richardson, who received the medal, said: “What a huge honour it is for Leander to be recognised with the award of the town medal. This will be greatly appreciated by our membership across the world.

“I just hope we can continue to contribute in some way to the great Henley community.”

Mr Howell said: “It was a great honour to be asked to present the medals and I thought they were two outstanding recipients.

“I had a word with one of Ian’s colleagues before coming in and they were saying, ‘you couldn’t have given this medal to a better person — he has been involved with everything over the years and done a fantastic job’ and I agree.”