Yes, we should ban lorries that cracked my listed home 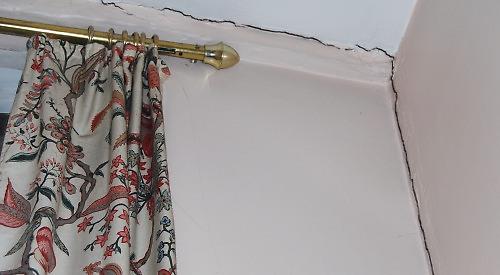 A WOMAN who spent £7,000 on repairing cracks at her home caused by passing lorries has welcomed plans to ban heavy goods vehicles from Henley at night.

Judy Dinsdale, who has lived in Northfield End for almost 40 years, says the move announced by Henley’s county councillor David Nimmo Smith should have been made sooner.

She says the road outside her house is increasingly used by lorries as a rat-run, a problem she first raised in the Henley Standard more than four years ago when two large cracks appeared on the second floor of her Grade II listed Tudor house.

Councillor Nimmo Smith, the county council’s cabinet member for environment, who is standing for
re-election on May 4, has asked highways officers to work up a scheme to prohibit HGVs using the town from 11pm to 6am.

He says he has received complaints from residents about the noise and vibration caused by lorries and he is also concerned about air pollution.

Ms Dinsdale, 78, who is retired, said: “I’ll support anything which diminishes the traffic going through this area. I’d like to see more done, of course, but it’s a start.

“Really it’s the volume of HGVs and the noise they make. They break up the road and then you get potholes and the vehicles go into them and you get noise and juddering. It’s now compounded by pollution.

“It’s absolutely dim to have a conservation area where HGVs race through, hitting potholes, causing pollution and noise.

“HGVs come through here and aren’t delivering anything when they could use roads like the A34. The drivers actually prefer to use this route than go on the motorways.”

In 2013, Ms Dinsdale found the cracks in her property but her insurance company wouldn’t pay to have the wall “pinned” back together. She said: “£7,000 out of my own pocket disappeared on really nothing at all and that really isn’t funny.

“I remember at the time thinking ‘is the whole house safe, is everything going to start to pull apart?’ It was really awful.”

Since then she had not had any more structural problems but the lorries are still coming.

“The problem hasn’t gone away, it’s still with us,” said Ms Dinsdale. “If anything it’s worse because the vehicles are bigger and there are more of them. I suppose the awful thing is you get used to it, don’t you?

“Whatever David Nimmo Smith is suggesting, I bet it doesn’t happen tomorrow. It has taken four years to get to this point. It’s too little but I suppose it’s not too late because nothing’s too late.

“Of course, the problem is everywhere, isn’t it? It’s not just here.”

She said it would help if the road surface was of the same quality as a motorway but the cost of this would be prohibitive.

The proposed ban would require a statutory six-week consultation before being considered by the county council’s cabinet. The scheme would cost about £50,000 to implement, including signposting.

Cllr Nimmo Smith said the money would need to come from the Community Infrastructure Levy, which is paid by developers.

Town and district councillor Stefan Gawrysiak, who is standing for Henley Residents’ Group in the county council elections, welcomed the ban.

But he added: “Pollution, noise and vibration happen 24 hours a day, therefore we should have a 7.5-tonne weight limit for HGVs all day.

“The staggering thing is that Cllr Nimmo Smith has done absolutely nothing on this for four years — no pedestrian crossing, few pothole repairs — and just because there’s an election, rabbits are being pulled out of the hat.

“We needed this measure four years ago and he did nothing. As county councillor, I would pursue a ban for HGVs in Henley with real vigour.”