Fit to be a firefighter 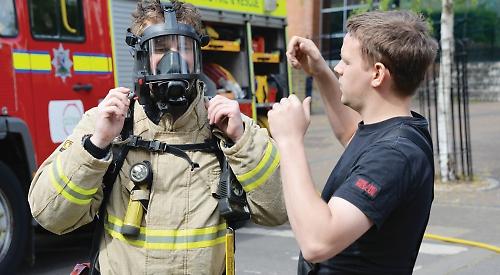 VOLUNTEERS were given a taste of what they would have to go through in order to become retained firefighters.

They were taking part in a “have a go” day hosted by Oxfordshire Fire and Rescue Service at The Henley College on Sunday.

The four hopefuls took part in a series of practical tests, including ladder climbing, hose running and putting on breathing apparatus.

They were Andrew Hepburn and Emilia Bersella, from Henley, Harrison Lacey, from Hambleden, and Tony Dixon, from Watlington.

Each one was timed as they completed tasks including running 25m with a hose, carrying two lengths of hose 100m and carrying a 30kg barbell 100m.

The volunteers also had to drag a dummy, which simulated rescuing a fire casualty.

Mr Hepburn said he was attracted by the challenge of becoming a part-time firefighter.

He said: “It’s a good way to help people as when you’re stuck in your day job you don’t go and do these things. People work for charities, which I haven’t got time to do, but to help people in this way would be incredible.”

He said the tests were harder than he had expected but the encouragement from the firefighters had helped.

Mr Dixon said: “I’ve been wanting to do it for a couple of years but the circumstances haven’t been right.

“I think it’s an incredibly valuable job but there are not enough people to do it.

“I’ve got a small child so I don’t go out much in the evenings, so I thought this would be a good thing to do.” The event was part of a campaign to recruit more part-time firefighters.

They are needed at Henley’s station in West Street, where availability is currently at 80 per cent, and in Watlington where the station was unable to send an appliance to a blaze at a shop in the town centre earlier this month because there were not enough staff available.

On-call or retained firefighters, who make up 60 per cent of Oxfordshire’s operational fire and rescue service, have other jobs but are available to answer an emergency call.

Nick Windsor, watch manager and station support officer for Henley and Watlington, said: “The day went very well. The guys showed a good level of fitness and a good understanding of what would be expected of them. They were keen and enthusiastic and they seemed to be enjoying it.

“Both Henley and Watlington fire stations are looking for new firefighters as both have lost a few and we’re looking to provide the best coverage we can.”

Retained firefighters earn, on average, £5,000 to £9,000 a year and receive the same training as full-time firefighters.

As well as practical assessments, potential recruits are interviewed and have to undergo psychometric testing and a medical.

Mr Windsor said: “The job is demanding on individuals. It restricts what you can do to some extent. You have to stay within five minutes of the fire station, for example.

“But it is also good because it does challenge people. Quite a lot of people can get in a rut and it provides a new challenge in their lives.

“At both stations there is good camaraderie and they all get on really well and have a good time.

“It is also rewarding for employers who get somebody who is effectively a trained fire marshal and first aid trained.”

If you’re 18 or over and live or work within close proximity of a fire station, you can apply. For more information, call Mr Windsor on 07775 827256 or visit www.oxfordshire.gov.uk/oncall
firefighters

A drill night is held every Wednesday at Henley fire station from 6pm.

Mr Windsor said: “If you are interested in helping your community then come down and enquire.”