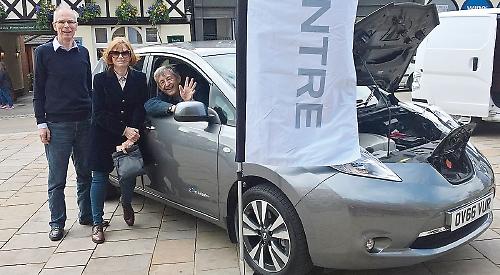 AN electric vehicles demonstration was held in Henley on Saturday.

Visitors could take a look at the Nissan car and van in Market Place, which were provided by the Oxford dealership at the invitation of South Oxfordshire district councillor Joan Bland.

Councillor Bland, a Conservative who is standing in a Henley Town Council by-election on Thursday, said: “I went to a conference in London on air quality recently and I met one of the directors of Nissan and he was telling us the good things about electric vehicles.

“I invited him to come to the town square to show us his electric vehicles. It’s really to get people aware of the different options out there and I’m going to invite other manufacturers of electric cars so people can have a look. They are expensive to buy but are obviously very cheap to run.”

She said there was a lot of interest shown in the vehicles.

Henley was designated an air quality management area by the district council in 2002 but since then pollution levels have risen steadily.

In the town centre the levels of toxic nitrogen dioxide are one-and-a-half times the maximum safe limit recommended by Air Quality England. Cllr Bland, who runs the Asquiths teddy bear shop in New Street, said “We have an air quality problem and I want to do something about it.

“When you go up the hill at the top of Greys Road the air quality is fine, there’s no problem. But when you come down to the centre of the town there is. I live above the shop and we sweep the pavement every day and wash the windows and it’s quite revolting.

“We shut the shop doors because we don’t want the pollution coming in. I feel the effects but fortunately I go on the river nearly every day to row and I get a chance to clear my lungs but it is a problem and it needs sorting out. I’m not saying electric cars are the answer but we have to embrace new technology and understand it.”

Fellow Conservative David Nimmo Smith, cabinet member for environment at Oxfordshire County Council, said the council was considering using smart technology to make sure that the road polluter pays in proportion to the extent of the pollution they cause.

He said: “Road vehicles, and in particular diesel vehicles, pollute so it is only appropriate that all polluters contribute towards improving air quality.”

Councillor Stefan Gawrysiak, of Henley Residents’ Group, said: “While I support electric vehicles, it is shocking that the district council has a zero budget for air quality as the Conservatives, including Cllrs Bland and Nimmo Smith, voted against, so on the one hand they promote green cars and on the other they do nothing to make Henley a cleaner place.”