Gaskin adds to tally as Panthers are tamed 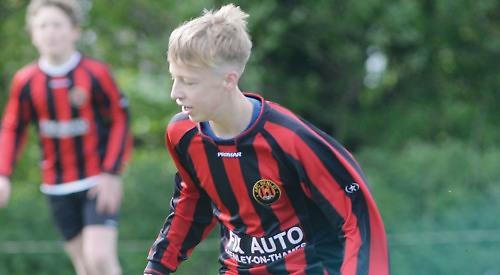 GOALS from Sam Jarvis, Max Gaskin and Alfie Hearn earned AFC HENLEY HOTSPURS U15s another win in the run-up to the end of season in their East Berks League match at home to PINEWOOD PANTHERS U15s at Jubilee Park on Saturday.

The hosts started on the attack almost immediately with a shot on goal by Jarvis being saved by the opposition goalkeeper in the first five minutes.

Pinewood almost scored from a corner but were thwarted by a good save by Matthew Balchin in the Henley goal. The hosts then attacked with Jarvis opening the scoring on 10 minutes. Both teams had several attempts at goal but were denied by the in-form goalkeepers.

Despite the Hotspurs being strong at the back Pinewood were able to bring the game level at the beginning of the second half.

Henley continued to press forward and Gaskin netted his 29th goal of the season after a shot from Elias Madzar. Hearn wrapped up the scoring just before the final whistle was blown.