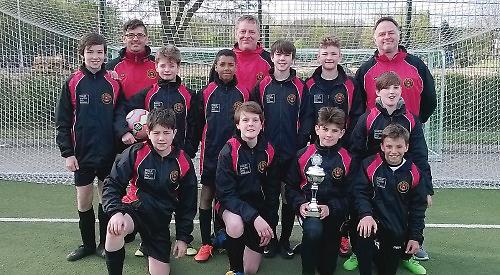 The Goosens Cup took place on Thursday, just hours after Henley had landed in Düsseldorf, and the home team dominated a tired looking Henley, although smart goals from Charlie Strachan-Jarvis and Matt Crook ensured the final score was respectable.

A rested Henley squad looked much more like a force on Saturday as they took on nine teams from around Düsseldorf, Cologne, Leverkusen and Leichlingen.

Henley lost their first game in the final second, again to Leichlingen A, but bounced back in match two, securing all three points against SC Coln. Next up was the Beyer Leverkusen Girls’ Academy, against whom they secured a creditable draw. The final match was drawn, which meant Henley missed out on a semi-final pace but were able to fight for fifth place in the first play-off.

Pitched against a tough Leverkusen outfit, Henley battled and probed, giving the German side no time to play and putting them on the back foot in attack.

In the end it was goalless, and so penalties followed. After three each it was level, Dan Clokey, Charlie Strachan-Jarvis and Casper Clark all slotting home with ease. In sudden death Clokey scored again, and then watched Matt Crook in goal save the Leverkusen striker’s low effort, securing the tourists a hard-fought fifth place finish.