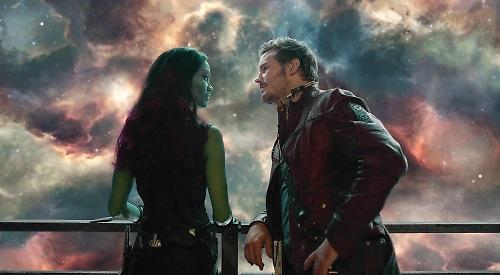 THE fact that director James Gunn has announced a third Guardians of the Galaxy film before the second has even made it to our screens tells you all you need to know about this cinematic venture.

At the risk of sounding like a broken record, while the creative minds behind these films will insist they are bringing a fresh perspective to Marvel’s comics, the primary motivation here is money.

Such is the pull of the Marvel Cinematic Universe, you can almost hear its stars laughing all the way to the bank.

Harsh? Perhaps. But I had serious reservations about the first film, which felt disjointed and featured characters that had not provoked feelings of such loathing since Jar Jar Binks graced our screens. I’m thinking here of the tree-like abomination Groot, and Rocket — a genetically-engineered raccoon.

But taking almost $775million worldwide gets you a long way in Hollywood and I suppose a sequel — and indeed a trilogy — were inevitable. Guardians of the Galaxy Vol 2 continues the team’s adventures as they traverse the outer reaches of the cosmos.

The Guardians must fight to keep their newfound family together as they unravel the mystery of Peter Quill’s true parentage.

Old foes become new allies and fan-favourite characters from the classic comics will come to our heroes’ aid.

Evidently the first film was hugely popular and accessible for children and adults alike, and provided a fun piece of escapism for audiences. Nothing wrong with that.

However, I wish, and hope for the future, we could have more of the harder-hitting and realistic stories, like last month’s excellent Logan.

While comic books, with their stories rooted in fantasy, captivating characters capable of achieving the impossible and juxtaposition of good versus evil, make them highly appealing for youngsters, it would nice to have more films for older audiences.

In essence, style is fine — but let’s make sure there’s substance.

Guardians of the Galaxy
Vol 2 is now showing at Henley’s Regal Picturehouse cinema.