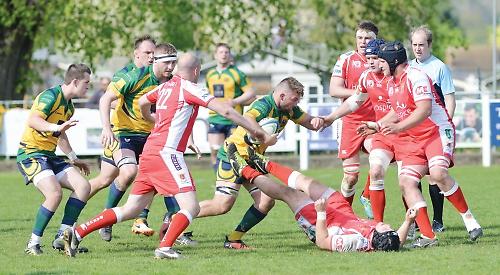 IN almost perfect conditions for running rugby, Henley Hawks comfortably saw off struggling Barnstaple at Dry Leas on Saturday with a bonus point victory which saw them score eight tries in the process.

With the men from Devon looking for points to avoid the threat of relegation, it was a good performance from the Hawks, who at times seemed to have found some form that reminded the supporters of what they are capable of but they will also be a little frustrated that they lost concentration at times and let Barnstaple back into the game and also failed to deal with the referee’s interpretation of the breakdown law.

The Hawks were quick out of the blocks and quickly had the visitors under pressure with their speed and an intent to run the ball at every opportunity. Tom Emery crossed for an easy try for the Hawks after just two minutes, a try which Liam O’Neill converted.

Shortly afterwards, a steering break from his own 22 by Alan Awcock took play into the visitors’ half. Despite being forced into touch, the Hawks took the line-out quickly and transferred the ball through the backs to Sam Portland who crossed in the opposite corner. Barnstaple were struggling to cope with Henley’s approach and the Hawks scored again when Joe Butler made a weaving break to give Xavier Andre the opportunity to score which he took against a weary looking Barnstaple defence. The only reply from the visitors was a penalty from scrum half Joe Petherbridge.

Henley’s bonus point try came when some good interplay from Hawks forwards Tom Emery and Jim Hadfield allowed Dave Hyde to break through some poor tackling to score. O’Neill converted to give the Hawks a 24-3 lead.

The Hawks started to have trouble at the breakdown, something that would plague them throughout the game and they gave away numerous penalties in this area which began to stem any momentum.

Having got the long journey from Devon out of their system, and helped by a lack of concentration from the Hawks, Barnstaple then enjoyed their best spell and to their credit scored three quick tries of their own. Another possible attack from the Hawks broke down with a loose pass and the visitors hacked the ball forward and wing Toby Williamson won the race to touch down in the corner. Petherbridge converted. The visitors also showed they could run the ball and a good break from centre Jake Murphy with support from Winston and Hague allowed fullback Will Topps to score the first of his two tries. His second came just before the break when he finished off a break from Williamson with an easy run-in through a static Hawks defence. Petherbridge converted to leave the score at 24-22 at half-time.

There was all to play for but just after the break, Harry Burn capped a strong performance when he poached a try which O’Neill converted.

The Hawks forwards, looking fitter than their opponents, started to get a lot more control in the game and they extended their lead when Joe Butler cleverly cut inside and with support from Awcock and Jake Albon, eventually allowed Rob Bell to score a try which O’Neill converted.

The Hawks back row were dominant with Dave Hyde making some powerful drives in an outstanding performance. With Barnstaple now restricted to trying to run out of their own 22, it wasn’t long before the Hawks initiated a mistake under the visitors’ own posts and Marcus Lowe pounced to score. O’Neill converted. Barnstaple enjoyed a bit of possession but the Hawks defence was more organised and effective than it had been before the break and there was always the possibility of a break-out from the speedy Portland. Eventually the Hawks made their way into the Barnstaple half and scored their eighth try from a driving line-out, something the Hawks have made good use of this season, Emery getting the touchdown.

Henley had a further golden chance to add to their tally when Hyde broke clear only for Harry Burn to spill a try-scoring pass. Barnstaple never gave up and deserved their bonus point for their fourth try scored by Kevin Angel right at the end.