What did the Queen say? Book reveals all 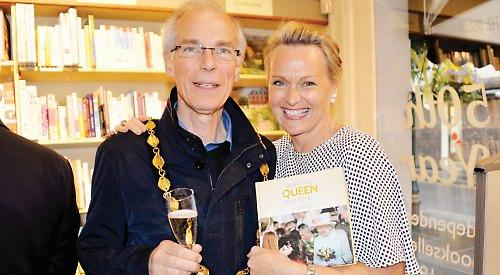 A WOMAN from Henley has published a book of anecdotes about people’s encounters with the Queen.

About 100 people attended the official launch of What The Queen Said To Me by Chilli Brener at the Bell Bookshop in Bell Street.

They were greeted with a glass of champagne and given a slice of a commemorative cake that was iced with a photograph of the book cover.

Mrs Brener, 48, is a part-time reflexologist and had never considered writing a book until 2012, when she overheard a man being interviewed on television about meeting the Queen.

She was struck by how much he enjoyed recounting his story and decided to find and interview other people with similar experiences.

“It was a very slow, organic process,” she said. “If a publisher had approached me out of the blue with this brief, I wouldn’t have known where to begin. I certainly didn’t expect to be interviewing the likes of Sir John Madejski and Mike Read.”

One of her interviewees was Elizabeth Hodgkin, who was Mayor of Henley when she met the Queen in 2012 when she attended a diamond jubilee celebration at the Henley Business School at Greenlands, off Marlow Road.

The Queen told her: “I’m so sorry about all the traffic problems that I have caused in Henley” to which Mrs Hodgkin replied: “Not at all.”

The Duke of Edinburgh, who was also present, then lifted up her mayoral chain and remarked: “Hmmm… nice badge!”

Read has met the Queen four times. The first occasion was at a charity concert in the grounds of Buckingham Palace in 1979 where the Queen confessed that she may have caused “a bit of a problem” during the performance.

She had been waving her hand to waft away smoke from several flaming torches when a children’s choir began drifting out of sync with the backing band.

The Queen told Read: “I think it was all my fault. I think they thought I was conducting them.” In 1982, the former Radio 1 DJ was due to give the reading at a televised service at St Paul’s Cathedral.

He took a seat behind the lectern, a few feet from the Queen and Prince Philip, not noticing that everyone else was standing and stood up again instantly.

Read recalled: “She did give me a suitably admonishing look. In another era I may have ended up in the tower but in this age of comparative reason, she just gave me the very unimpressed eye.”

Mrs Brener, who lives in King’s Road with her sons Sidni, 14, and Jesse, 11, fitted her research around her job and family commitments.

She would interview her subjects on tape then check the dates and facts online before writing up their stories. She said: “I worked on personal recommendations and didn’t want to advertise for people to come forward as anyone could pretend to have met the Queen. It would have been hard to verify.

“The research was fascinating as I had to learn a lot about the royal family and had no idea how hard the Queen works.

“It was tricky at times because the internet is a minefield of inaccurate information but I enjoyed it.

“Everybody loved taking part and remembered every detail with incredible clarity. Their eyes lit up and they experienced a wonderful feeling of nostalgia as they felt proud and privileged to have had that encounter.

“There was an overwhelming desire to share their stories, which is lovely as we tend to file those things away in our memories and not tell them. It was nice for somebody to take an interest in their anecdotes.

“There were two or three stories which the contributors ultimately decided they didn’t want to go in, which I respected.

“I made clear that people could pull out at any time and didn’t want anybody to feel under pressure.

“The book was never about spilling secrets or unearthing some kind of scandalous underworld — I just wanted it to be charming, captivating and informative.”

Mrs Brener photographed most of her subjects and took some shots of the Queen at her 90th birthday celebrations in Windsor last year, In 2015, she wrote to Buckingham Palace to tell the Queen about the project.

She said: “Some people have suggested that one should never share what the Queen says in conversation so I wanted to get her blessing without seeking it explicitly.

“I took three hours to write a single-page letter which I worded in such a way as to invite a ‘good luck’ message. I received a reply wishing me all the best, which was such a relief because I wouldn’t have gone ahead if there were any objections.”

Mrs Brener said her favourite story was that of Nellie Williams, from Wokingham, who met the Queen as an eight-year-old schoolgirl in 1977.

She had previously waved at the monarch as she passed through Windsor Great Park and asked her whether she remembered. The Queen replied: “Well, yes, I think I do.”

Mrs Brener said: “She doesn’t know whether the Queen really did remember her, but it was so lovely that she wanted to make that child’s day. That’s one of her greatest strengths — she tailors every conversation to the person she’s speaking with.

“People love her because she represents stability in an ever-changing world. The people I interviewed summed her up as stoic, warm, kind, thoughtful and someone who always looks you in the eye when conversing.

“She’s the kind of person they’d love to sit down for a cup of tea and have a good old chinwag with.”

The book could become an important historical document.

Mrs Brener said: “She is our longest reigning monarch and in years to come people will be very interested in what she had to say.

“It would have been fascinating if someone had written a similar book about Queen Victoria.

“I did think it might make a nice series involving other famous individuals but that was really just a fleeting thought.

“I could do the Dalai Lama, Wills and Kate, the Duke of Edinburgh or even Donald Trump!

“However, this kind of thing doesn’t work for everyone. The Queen has really captured people’s hearts, which is why everyone is so interested in what she has to say.

“I also don’t know whether we’d get away with printing some of the Duke of Edinburgh’s conversations or whether we’d have to censor them.”

l What The Queen Said To Me costs £14.99 and is available from the Bell Bookshop.