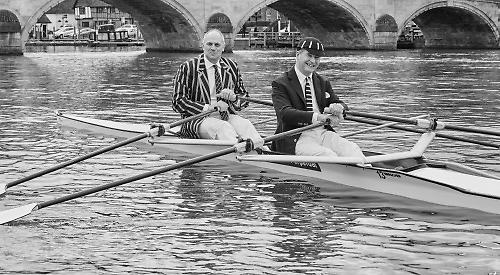 HENLEY Royal Regatta has unveiled official partners for the first time in its 178-year history.

It has joined forces with the Bremont Watch Company, which is based in Henley, Hackett London and Aston Martin.

They were chosen because of their British heritage, premium offerings, and synergies with the royal regatta’s values and ethos.

Bremont will be providing handmade mechanical stopwatches to time all races at the regatta and will also be developing a range of official royal regatta timepieces.

Hackett will create bespoke of royal regatta clothing for men and women, which will be available to buy at the regatta, as well as in Hackett stores and online.

The range will include formal wear, in keeping with the famous standards of the Stewards’ Enclosure, as well as a range of casual wear.

Aston Martin will showcase its range of luxury sports cars during the regatta and they will be used to transport key officials and VIP guests during the event.

To commemorate the partnership, the company will create a special Q by Aston Martin DB11.

Income from the partnerships will allow the future development of the annual five-day festival of rowing and help increase its standing as one of the premier events in the British sporting calendar.

Sir Steve Redgrave, chairman of the regatta’s committee of management, said: “The regatta is proud to be involved with such highly respected British brands and their association with the regatta will not only enhance the spectator experience but will mark the start of further long-term partnerships.

"The Stewards have always sought to retain the unique charm and character of the event and these partnerships will work in a mutually beneficial way without overtly commercialising the event.”

Nick English, co-founder of Bremont Watch Company, said: “Henley has always been internationally renowned for being the global home of rowing and with our manufacturing base being meters from the River Thames, the tie-up as official timekeeper for Henley Royal Regatta has a lovely synergy. Given the event has never had global partners, dating back to 1839, it’s a real honour to have been asked to get involved.”

Jeremy Hackett, chairman and co-founder, Hackett London said: "Hackett’s well respected position within the rowing community and the ability to provide attire for gentlemen for all sporting and social occasions made it a natural step for Hackett to become one of the initial partners of this most stylish and quintessential British event.”

Simon Sproule, vice-president and chief marketing officer at Aston Martin, said: “Aston Martin is an iconic marque of unrivalled heritage, so a partnership with an equally iconic event such as Henley Royal Regatta is a natural fit. We are delighted to be one of the first partners to be associated with an event that is at the heart of the British sporting calendar.”

This year's Henley Royal Regatta will take place from June 28 to July 2.