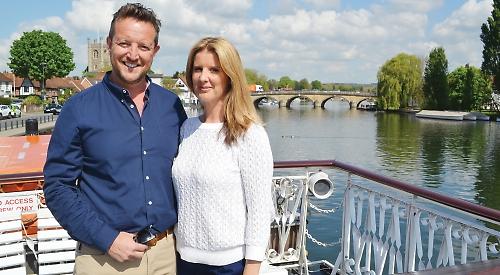 A HENLEY boat hire company has created a gin inspired by its founder.

Hobbs of Henley was due to launch Mr Hobbs at a party on board The New Orleans last night (Thursday).

The 45 per cent premium gin is based on the tipple enjoyed by Harry Hobbs, who founded the company in 1870 and would often be seen in the mornings with a flask while in his punt on the Thames.

Jonathan Hobbs, Harry’s great, great, great grandson, who now runs the business, and his wife Suzy came up with the idea while looking through old notebooks and coming across what they believe was a recipe for the gin on the back of a photograph of Harry.

Mrs Hobbs, who is the company’s business development manager, said: “I’ve been involved with the family business for a few years and realised we don’t have enough about its heritage and history.

“I started looking into the forefathers and the five generations of the business. I found that Harry was a bit of a legend and liked his drink, especially gin.

“We were going through lots of old archives and notebooks and there was a list of botanicals. We reckon he made his own gin and this gave a clue that these were the ones.

“There are five of those in our recipe and we blended it with other things like citrus to make it more modern.”

The couple spent two years working on the gin, including visiting distilleries and choosing their own extra ingredients.

Mr Hobbs features angelica, orris root and juniper as well as lime leaf oil, lemon peel and marshmallow root, which is picked from Marsh Meadows, near the company’s base in Station Road. The spirit is made at the Foxdenton Estate in Buckinghamshire, close to the family’s ancestral home in Hambleden.

Harry was landlord of the old Ship Hotel in Henley when he founded Hobbs, first at Wharf Lane and later at the present-day site.

He was well known for his distinctive bushy beard and the parties he held along the river.

Mr Hobbs said he wanted to stay local while making the gin but was forced to look further afield for a distillery.

He said: “We went through a long process with selection, finding the right people to work with and trying to keep it as local as possible.

“The distillery ties in quite nicely as the Hobbs family dates back to 1490 in Hambleden. We lived in Buckinghamshire and it wasn’t until Harry moved to the Ship that we moved to Henley.

“He had the vision of starting to hire boats and later building them too.”

Mrs Hobbs added: “Jonnie and I love gin and we’ve always thought how fun it would be to bring out our own brand. We’ve been on a few gin-making courses and did a bit of market research! We are really happy with what we’ve got.”

The launch party was due to be attended by more than 100 guests, including double Olympic gold medallist Alex Gregory, actor Simon Williams and mayor-elect Will Hamilton.

The couple are now hoping to expand into other drinks, including beer and flavoured spirits.

Mr Hobbs said: “We are going to see how well received this is but ultimately the aim is to distill it ourselves and open a distillery in Henley.”